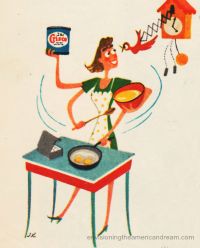 But sometimes (okay — frequently) I forget this!

Yesterday, after I came home from a freelance editing job, and while I was organizing the homework assignments I had to write for this week, and after I had talked to the actress in NYC again about nailing down the flight I needed to take to get to NYC and begin working on the original off-Broadway musical, and while staring at the piles of notes I had for my screenplay re-writes with Kevin in Brooklyn, and from the producer in L.A. for the TV series we’re trying to develop, and while thinking about the new book I wanted to write (a fun murder mystery that I think will be a blast! I already have a producer interested in a holiday screen adaptation for women’s television), I thought to myself: You know, I ought to sign up at oDesk and eLance, too, and try to make some more money…

But then, as my head hit the pillow last night, I thought to myself: How bizarre! What the heck is the matter with you? When do you think you’re actually going to be able to do anyone else’s writing and still have time for your own???

So I un-signed up this morning.

Why is it that it is so hard for writers to consistently earn enough money to live on and still write creatively (as opposed to hired-and-sometimes-hack work that other people can’t or won’t do)? It has plagued me throughout my entire career, and I’ve been a professional writer now for 25 years. Sometimes the money is great. Sometimes it stays consistently good for a good chunk of time. Then it disappears entirely and you resort to prayer. Then, happily, it picks up again. Sometimes, it even snowballs into more money than you’ve ever seen, but I haven’t experienced that. Yet. (You’ll notice, though, that as a recently ordained minister, I have made resorting to prayer part of my full-time job! I am really, really good at resorting to prayer. However, that said, I have also gotten really good at standing back and letting prayers be answered, left, right, and center. It had a lot to do with this stuff –click link & scroll down– and it took years to master it. And some days, I don’t master it at all.)

I honestly think that you’ve got to be happy. It is imperative. Do only what makes you happy — and you might be surprised at what types of little jobs might make you happy. I know I’ve surprised myself over the years. (4 years ago, I said yes to a 2-hour cleaning job without knowing it meant I would be working for this company and that, as a writer, it would open all kinds of doors for me and turn my life around.) Make yourself happy and then the other stuff that comes to you makes you, surprisingly, even happier. But sometimes you have to really wait.  And that “waiting” part is when a whole lot of people just give up, turn around and go home. (i.e., “do stuff they hate.”)

I don’t think that writers are going to get paid what they’re worth in this lifetime. A small few will — but it’s fewer and fewer all the time. However, you can at least make enough to live a fulfilled and happy life.   And, really, I believe that’s what we’re here for. When we’re fulfilled and happy, we do astounding things that can’t help but have a beneficial trickle-down effect for everybody.

On that happy note, I gotta scoot!! Have a terrific Wednesday, wherever you are and whatever happy thing you’re doing!! Thanks for visiting, gang. See ya.

[One of my all-time favorite films. Who knew it would be part of my destiny, kind of??] 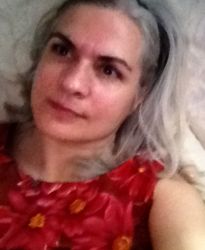 People wonder how I manage to have such a great life.

It’s simple. I wake-up at dawn and my first thought is to not panic.  I tell myself that somehow, someway, life is gonna work out all right.

Then I try to remember if anything good happened the day before. Usually tons of good stuff happened the day before, but I have to make an effort to remember.  Once I’m convinced that good stuff actually does happen, I get out of bed. I go feed all the cats, clean the litter boxes, then make my own breakfast and bring it back to bed. Fluffy is always waiting to have breakfast with me in bed.

Here she is last night, with her summer lion’s shave. She looks goofy, rather than fluffy. I love her! She is in no way feral. She is the most loving cat imaginable, but the drawback is that she hates other cats. This gives her 9 other cats to terrorize daily and it gives her deep pleasure but makes the rest of us a little nuts.  She was also a rescued kitten but she is 8 years old now. We rescued her in Easton, PA. She appeared on our front porch, starving, pregnant, and dying from pneumonia… Many hundreds-of-dollars-and-years later, she is the terrorizing cat we know and love today.

Meanwhile, back to having breakfast in bed with Fluffy… I think it’s important to start mornings off peacefully, gently, quietly.  Otherwise, my days just turn to nothing but stress really quickly. I usually listen to some sort of Law of Attraction audio thing on YouTube while having breakfast. This is the one I listened to this morning. It was really good. Really uplifting. Then, I listen to my daily lesson for A Course in Miracles and give that some thought, then I go put all the breakfast dishes in the kitchen , go back to bed and meditate for 15 minutes. (I am currently doing Deepak Chopra’s 21 Day Meditation Challenge-thingy with Oprah. Well, Deepak is presenting it with Oprah; I’m not meditating with Oprah. We are currently “Expanding Our Happiness.”)

Then, when all that’s done, I lie in bed for a little bit and usually feel good about life.  This morning was no exception, although I found this (below) to be particularly helpful in feeling good about life! You might want to skip all the other stuff I mentioned above and go straight to this one every morning: