No one ever, EVER writes to me about this book, so I would really like to read your email.

New Orleans Nights is an eBook reprint of a novel I wrote in 2004 specifically for Walden Books, which was originally titled In the Secret Hours. It had a really pretty cover back then. It was published by Magic Carpet Books in New York, NY. 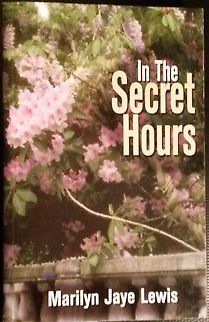 Due to a contractual SNAFU with Walden Books, though, I wound up having to write the entire novel in 6 weeks, and the novel itself had been sold on a one-paragraph proposal. This means that, apart from that one-paragraph that I dreamed up in about 15 minutes, I had no clue what the novel was going to be about! I thought I had an entire summer to figure it out. But alas, it turned out that I had only 6 weeks…

And to be absolutely frank with you – to this day, I have no clue what the heck that book was about! I simply do not remember the plot of it.

So, upon glimpsing an email in my inbox re: New Orleans Nights that instantaneously disappeared, I went over to Amazon and looked it up. Wow, gang! It sounds like a super terrific book!

I was kinda flabbergasted. I honestly do not remember a single solitary word of this novel. However. Here’s what the current publisher has to say!

Evie had two problems. She was about to turn twenty-one and inherit the DuMaret fortune from her mother, which would make her one of the richest and most sought after women in New Orleans; and her father, who wanted to control every aspect of her life as he already did her inheritance – he even had a husband all picked out for her, the son of another wealthy Big Easy family.

She had a third problem when she met Lucas Cain. Cain was drop-dead gorgeous and all her unfocused physical yearnings centered themselves around him. Before she knew it, Evie was giving her heart and her body to Lucas without reservation. But Lucas was a young man with a lifelong mission: he had come to take over her father’s business, her family’s fortune, the very mansion in which they lived and -when he meets her – Evie, as part of the prize.

As their passionate encounters continue, against the sensual seductiveness of the New Orleans’ Nights and the glamorous French Quarter, Evie little guesses the revelations that lie ahead that will shatter her romantic idyll. [I have absolutely NO CLUE what these shattering revelations are! – MJL.]

Gosh, gang! Buy it today! And let me know what the HECK it’s all about!