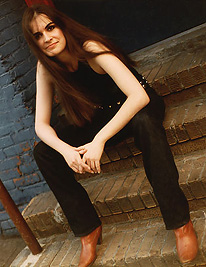 Here’s another song from my Hell’s Kitchen singer-songwriter days. (If you’re viewing this on your phone, you have to turn it sideways to see the music player.)

“Mother with the Gun”  was written in 1984 and was inspired by a headline in the New York Post that I saw while in the laundromat, wherein a young mother had shot her husband and then killed herself – all on their front lawn, while their very young kids watched.

It was a heartbreaking story that the Post of course turned into something lurid and sensationalized.

It’s probably not a stretch for you to see how I could relate to that young woman. Even way back then, my art was everything to me. I never wanted to get tied down to anything.  It terrified me that the world, or those around me, would just consume me, you know? And that there would be no time left for me to just be me and that I’d literally lose my mind.

This demo is actually a 24-track demo, not one I made on the 4-track in my bedroom. And if I remember correctly, no one in this particular band was my boyfriend… The music stuff was getting a lot less fun, though. I mean, when it shifted from the tape decks in our bedrooms, to the huge studios in midtown.

By then, I wasn’t dating musicians anymore; I was dating writers. Which meant a lot less heroin addicts in my world, but a heck of a lot of introverted heavy drinkers (myself included!).

And speaking of 24-track recording studios. When I was 21, I started going to recording engineering school in NYC, to learn my way around a recording studio. You know, back then, recording studios were pretty much a private boys’ club, so if you were a girl and wanted to learn anything about it , you had to go to school.

So I went. And had a 4-point grade average, was at the top of all my classes, and – yes! – was the only girl! And when it came time to get our internships in the big studios in midtown Manhattan, all the guys in my class got actual internships at studios where all the really famous rock & roll groups recorded. I got offered – yes! – a receptionist’s job at one of the midtown studios, where I would be needed to answer phones and make coffee – oh, and always dress sexy. They actually said that to me.

I kid you not.

Naturally, I declined the job, basically told them all to get fucked, and bought a 4-track and just hung out and did my music in my room.

Gosh, I enjoy being a girl!! (I’m so happy that it’s way different for most girls in music nowadays.)

Okay, gang, have a good Sunday, wherever you are and wherever it takes you. Thanks for visiting. I love you. See ya!