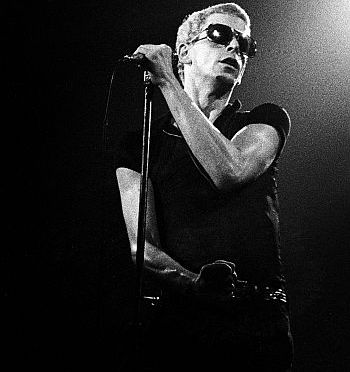 Do you notice how sometimes when you’re sick, you wake up and think, Hey I feel lots better today, and so you try to do a million things only to make yourself 10 times sicker than you were even the day before?

That was me yesterday. But because of that, I spent a lot of really spacey, sort of drug-induced dreaminess in bed this morning because I was incapable of doing anything else but just lie there for 5 hours, trying to drink coffee.

And I was thinking about my Lou Reed birthday post from yesterday, and thinking about that song Walk on the Wild Side and how much it meant to me when I was growing up, and how songs like that literally  helped get me to NYC – helped me find my way there.

I moved there when I was 20, in 1980, thinking I would stay one year and then move to L.A. But once I got to New York, it was like everything I ever dreamed life was supposed to be, and also a whole lot worse. So I stayed there for nearly 30 years.

I think of those years in NYC as “my life” and everything that came afterwards as basically just the stuff I need to do before I die. Well, I did fall in love recently and that might change things, change my take on the world. It’s too soon to know for sure but I guess we’ll see.

Anyway.  Loyal readers of this lofty blog know that pretty much the very instant I moved to NYC, I fell in love with an older man who turned out to be a hitman for the Mob and then I launched myself headlong into a pregnancy with him that devastated me. And in the middle of all that, John Lennon was killed, and he was truly one of my girlhood heroes.  All of this was, literally, within a month of my moving to NYC. Once you get NYC into your veins like that — and it was so easy to do back then; it was a whole other world then — you just can’t get it out of your system, really. I became a New Yorker, like, overnight.

In the mid-1980s, I joined the Visiting Nurse Services of NY as a volunteer, because of the AIDS crisis going on back then. I went into the homes of people in the last stages of AIDS and tried to help make their lives easier in anyway they needed until they died, which was usually right away. By the time they sent someone like me into someone’s home, it was sort of the death knell.

ME: “I’m just here to help you with whatever you need from now on.”

Another patient of mine lasted for quite a few months when they assigned me to him.  I was 27 at the time. You know, this kind of work is very confidential.  However, not only was this over 30 years ago, the patient’s Significant Other mentioned me at the funeral, so that was public, and so now I feel I want to go public, too.

That particular patient was the photographer, Peter Hujar. A gentle, warm, lovely man. A very talented photographer who documented so much of the NYC I lived in — and had gone to NYC to experience in the first place.  He had some truly famous, and infamous, photos framed and mounted on the walls of his modest apartment.

I bring all this up in connection to Lou Reed’s song, Walk on the Wild Side, because Peter Hujar took some iconic photos of men and drag queens from that era, including the men Lou sang about in that song.

When Peter first let me into his apartment that first day, I looked at all those photos hanging there on the walls and was stunned. I said, “Did you take all of these? I know these photos.” They were truly part of my life.

He was already so fragile by then, even though he would live a couple more months. But that day, he said to me, “You’re just perfect, you know that? I apologize for being so sick.”  In the early days of the AIDS crisis, the patients were basically treated like they were radioactive, because the disease was not understood yet but it was killing everybody. Most people back then would not get near anyone who was known to have AIDS. It was hard for the nurses to find enough volunteers. For some reason, I never had a fear of being around them. I saw them as people who needed help while they were dying and that fear was never going to be the right response when anyone needed help while they were dying.

Below are a couple photos Peter Hujar took. Click on them and they get larger. I’m guessing he also took photos of Holly Woodlawn, Joe Dallesandro, and the Sugar Plum Fairy (Joe Campbell), but you’d have to google all that.

Yesterday, when I posted about how the song Walk on the Wild Side helped shape my life, making me who I am, I meant it on so many levels. Even though I’m almost 60 now, those very early days of mine in NYC seem like they truly happened just yesterday.

I’m not sure why so many gay men, drag queens, heroin addicts, gay alcoholic poets and painters, had such an enormous influence on who I was and who I became as a writer and as a woman, but they really did. A song like Walk on the Wild Side is part of my DNA now.

And I think that when people in Toronto (and sooner or later NYC), finally see the one-woman show I’ve been working on for 5 years now with Sandra Caldwell about her own life (The Guide to Being Fabulous), you’ll agree that the two of us meeting at all was pure destiny from the word go.

I was totally born to do this, to help bring her incredible story to the stage.  My play, Tell My Bones, about the painter Helen LaFrance that I wrote for Sandra, is a beautiful piece of theater that I want to share with the world. But being part of a play like The Guide to Being Fabulous is why I was born.