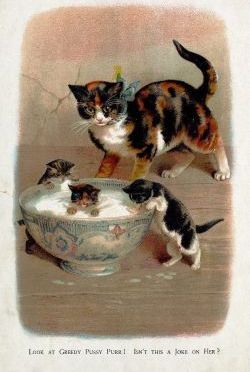 Well. This morning was the first morning in 7 years — when I haven’t been out of town, or out of the country entirely, that is — that I’ve woken before dawn, went down to the kitchen and the cats had already been fed!!

I woke up at 6am, and for some weird reason, Huckleberry was sort of dancing merrily in my bedroom. So I figured I’d better hurry up and get downstairs and feed them before my mom woke up, because the cats scurry and hide and then won’t eat if someone else gets anywhere near the kitchen at feeding time.

But when I got downstairs, my mom was already awake and in the kitchen washing the cats’ bowls because they’d already eaten. I was stunned by this.

I mean, I know she took care of them for that week that I was gone, but I just wasn’t expecting that she would do that. This trip, she’s just visiting, you know?

Well, I thanked her and then turned around and went immediately back to bed until the sun came up. I had no clue what to do with myself at that hour if the cats didn’t need me to feed them. And it occurred to me — well, it’s been occurring to me the whole time my mom’s been here — that I spend an enormous amount of time alone, and it’s starting to throw me when my routine changes. If I’m traveling and I’m staying with people, or interacting with them really early in the morning, I’m okay with that. Because I’m in a different environment. But it’s been nearly 2 years now that I’ve been here alone in this house, in a town where no one knows me at all…

I seriously don’t want to become one of those old ladies whose intensely isolated and set in her ways!! But it felt like it was happening to me.

My mom is really, really quiet. And so am I, normally. The first night that she was here, she had a few beers and that always makes her very chatty. But the last 2 nights, she hasn’t felt like having any beer, so she’s been just super quiet. And I find that 9.9 out of the 10 things that are always in my head only make me sound utterly insane if I try talking about them, so I get really quiet, too.

It added to my fear that I was just becoming really isolated and incapable of talking to people in a normal way and that I was just going to get old and be like that. The full moon isn’t helping. It feels like it’s one of those full moons that’s causing me a lot of free-floating anxiety. Because I’m not sure why I would have all this weird anxiety otherwise.

Part of it is that I really want Blessed by Light to get a book deal, and it’s been 6 months now that queries went out to various small presses. So that’s been on my mind. Other than that, I don’t have any real reason at all to feel anxious. But I feel it anyway.

My dad called & left a message on Tuesday evening and I didn’t have time to get back to him until early Wednesday morning. And when I called back, he answered immediately and wanted to know what had taken me so long to return his call. He was worried that maybe I’d fallen and since I’m alone, I couldn’t get to the phone…

Oh my god, you know? Have I become that little old lady who falls when she’s alone and then can’t get up?? Whoa. Like, what is happening here? It sort of freaked me out. I don’t feel old at all.

But when I told him that my birth mom was here, he was not at all aware of that, so you know, at least he’s not reading my blog…

Then last night, I got a strange email from my ex-husband in Seattle and he was talking about how difficult it will be to get to the grocery store when we get old and how it’s okay to get groceries delivered but that you don’t want other people picking out your produce for you, and public transportation doesn’t always take you where you prefer to shop, etc.

What the fuck??!! Jesus, it sounded so bleak. I wrote back , “You’re exhausting me.” You know, why is he bringing this up? Man. I’m just feeling so weird.

Anyway. I have decided to make an effort to not get too wrapped up in my daily routine and to try to not get too isolated. It was one of the reasons I threw out the old Christmas coffee mug instead of gluing it back together and keeping it as a “reminder.” There are indeed plenty of good things to remember about those early years — my first husband being one of them; my songwriting being another. But overall, I need brand new experiences now. I don’t need to remember 40 years ago in New York.

On a similar note, though, it has felt really weird to not be writing every day. Again, if I’m out of town or something, it’s not a big deal at all to not write. But being here in the house and not writing has felt very, very discombobulating. (Don’t you just love that word?) I noticed that I got really fidgety. I need to get a grip on so many things!

In the past, that would be an ideal time to have a few drinks, smoke some cigarettes, forget about all my cares & woes and either watch movies, or listen to music, or — heaven forbid — hang out with my friends. (Of which I have about 3, at this point, who aren’t gravely ill or you know, already dead. And none of those 3 come anywhere near Crazeysburg.) (So I need new friends, too. I’m accepting applications today at 3 o’clock…) (Just kidding, You needn’t fill out an application. Just show up.) (Roses and chocolate are good things to bring along, though.)

That reminds me! I gave Kara her birthday gifts, which she seems to have loved, and they did indeed make her think of her mom, who passed away unexpectedly last year. But then she turned around and gave me gifts for giving her the birthday gifts! It was the most amazing thing — has anyone ever done that to you?

Anyway, it was what she gave me that was so touching. She gave me little pieces of costume jewelry that had belonged to her mom. She said, “I know how much you love roses, Marilyn, so I especially wanted you to have this.” It’s a tiny pin, that her mom had had since high school. It absolutely melted my heart. 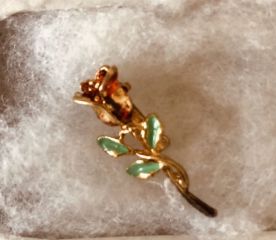 Okay, well. On that note. I still have a house guest here so I gotta scoot!! Thanks for visiting, gang. I hope you have a wonderful day, wherever you are in the world. Try not to get too isolated. Don’t live too far from your favorite grocery store. And don’t fall down without being able to get back up… I love you guys. See ya!