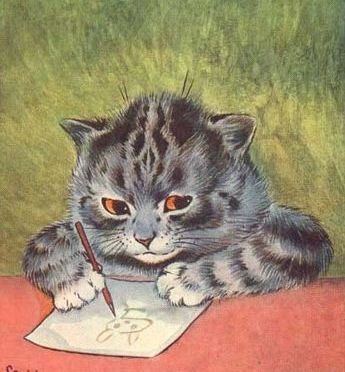 Well, through some quirk or miracle, all the snow has bypassed us. So, even though I love snow, I guess that’s a good thing today. I have to head back home as soon as the sun comes up. I have 7 cats who have been on their own for a couple of days now. (They have plenty of food and water, I’m just worried about the litter boxes…)

It did get really cold here, though. My dad being just shy of 90,  turned the heat way up. Luckily my bedroom is in the sunroom — walls of windows. So it’s a lot colder in here than in the rest of the apartment, which feels almost unbearably hot to me! Anyway. It is cold outside today and very windy.

So now we officially embark on a new era. My dad as a widower. And a widower who will have way too much time on his hands, so he’s already worrying about that. I am, too.  I asked him if he wanted to come live with me, but he declined. Not just because of the 7 cats, but mostly because he can’t imagine living in the middle of nowhere.

Here, he lives in an Independent Living complex — which means that as soon as anything goes wrong with him physically, the nursing home guarantees him a room. This whole area where he lives is just a massive compound dedicated to old age and dying. (It’s also really nice and really expensive.) But I guess it’s best for him to just stay put here, even though he’s by himself now. Obviously, though, I’m going to have to make a lot more trips back here from now on.

Which is good, because I only have to go to NYC, Toronto, and LA a lot this year… Anyway.

My first husband,  being Chinese, alerted me yesterday in an email that the Chinese New Year is almost upon us and it is once more time for it to be the Year of the Rat!!! Which is my year!! He is currently trying to locate my forecast for the year.  He said that, in general, though, it’s going to be a good year for all the signs.

I can already feel that this is a transformative year for me — work, money, emotional well-being. Those things are already changing in a pronounced way and it’s only mid-January. I guess maybe I need to figure out what to do about my “love” situation. I don’t know.  The man I love couldn’t be more married and unavailable if he tried. I think priests who are married to God are technically more available than he is, so my love is absolutely just thrown into my work. I try to at least put my love into the world, in that way, because that’s sort of the only real place it can go.

Sometimes it makes me feel indescribably insane, though, so maybe this will be the year that I deal with that, too. I honestly don’t know. But everything else in my life is truly transforming. And for now I’m okay with love being an intensely private thing that only goes out into the world. It certainly helps my writing. So we will see.

Its been an intense trip. A lot of old painful family issues hovered close to the surface for me this whole time, but I was able to not be held prisoner by them, and to let the past be what it was and just move on. The one glaring constant reminder of old history was that my older brother isn’t here. And even though I haven’t seen him in many years, not a soul even asked about him or mentioned him.

Maybe I will go into more detail about all that some other time, I don’t know.  I did find it disconcerting that everyone kept thanking me for coming to the funeral to support my dad or to support them in the loss of their mother. No one seemed to notice at all that she had been my stepmom for over 30 years. Stepmothers are big deals, you know?  Think of it — Cinderella  had quite a monumental stepmother; so did Snow White!! My stepmother happened to be incredibly kind and loving to me— and considerate and compassionate. For some reason, that doesn’t seem to have made an impression on anyone else.

Anyway, I think that metaphysical pondering is best left for another blog post. I need to get moving here. Have a good Sunday, wherever you are in the world! Nick Cave resumes his Conversations in Europe tomorrow, so that will give me something wonderful to ponder again for a couple weeks! Meanwhile, thanks for visiting!! I love you guys. See ya.