Yesterday, I actually got into my car, drove around the block and dropped off my water bill in the little water bill-dropping-off slot at our prestigious City Hall.  I can’t find an actual photo of our City Hall online, but it is that equally small brick store front type structure directly next door to this building: 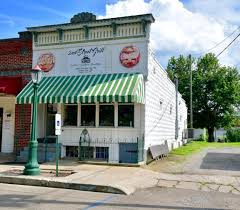 Even though it was chilly outside, it was a really beautiful morning and it felt so great to be in my car again and be out in the world. And the train went barrelling through while I was actually outside. So — the perfect morning.

Overall,  I did have a really good day yesterday. Peitor and I worked on Abstract Absurdity Productions stuff for about an hour. We had a great session. We laughed a lot and that felt so good — I was breathing better after the call than when I started it.

Abstract Absurdity Productions is actually a 3-fold project. The films, the website, and then a streaming series of micro-micro short episodes that relate to working in our Company.  All of it absurd. Yesterday, we were working on character development re: the series and it felt really great to be laughing that hard again.

And just in general, since Peitor is always — 24/7 — involved in the creative side of developing storylines, I’m the one who does all the constant research. And I actually like doing that. It’s just second nature to me. It involves a lot of scrolling & following on Instagram; tracking the videos on Short of the Week; tracking shows on Quibi (“Agua Donkeys” is so far my favorite), and scrolling through TikTok.

And even though our production company has nothing to do with pets or dirty jokes, I do spend a ton of time watching those really silly cat & dog “dear diary”  shorts on TikTok, and also the ones where that teenage boy tells a dirty joke to his very overworked/distracted mom and then the dad laughs really hard. And the jokes are actually  funny.

All this silly stuff just really makes me laugh. The cat & dog videos are kind of no-brainers, but I just love the videos where the teenagers (boys & girls, both) try to get their parents or grandparents to laugh.

Plus, all of this has the added bonus for me of being “Research.”

Yesterday, I also streamed the one-woman stage version of Fleabag by Phoebe Waller-Bridge. Last Friday, you could rent it for $5 and all the money was donated to help UK healthcare workers. So I rented it on Friday and then watched it last night.

You can see that I am itching to get back to working around here, for real. But I still need to go slow. My breathing still changes throughout the day, and I’m still trying to force myself to stay mostly in bed — since there’s apparently still plenty of time to send the virus in reverse and end up in the ICU.

It was funny how well-meaning friends — when I was past the peak of the virus and starting to feel a lot better — kept alarming me by pointing out what was happening to Boris Johnson. How he seemed to be stable then suddenly he was in the ICU.

And never, ever before had anyone compared me in any way whatsoever to Boris Johnson, then suddenly they were using him as a sort of diving rod for my entire future.  It was annoying and disconcerting, but I have to say it was an utter relief to me when he got better.

But anyway. I am better. Lots better. Just still have waves of not breathing at 100%. And I can still engage, for now, in the guilty pleasure of not getting dressed and lying around in bed and reading a book.

(Oh, and I really, really loved that Showtime series Patrick Melrose, with Benedict Cumberbatch. Wow, was it good. I might watch it again, actually.)

Okay, that’s it for today. Have a great Thursday, wherever you are in the world! I leave you with the song I’ve been listening to since last night — unlikely as it might seem! Enjoy, gang. Thanks for visiting. I love you guys. See ya!

Now I’ve had the time of my life
No, I never felt like this before
Yes, I swear it’s the truth
And I owe it all to you

I’ve had the time of my life
No, I never felt like this before
Yes, I swear it’s the truth
And I owe it all to you

Yes, I know what’s on your mind
When you say
Stay with me tonight
(Stay with me)

I’ve had the time of my life
No, I never felt like this before
Yes, I swear it’s the truth
And I owe it all to you

Now I’ve had the time of my life
No, I never felt like this before
(Never felt this way)
Yes, I swear it’s the truth
And I owe it all to you