Welcome to this rainy Tuesday in the Hinterlands!

I cannot tell you how much time I have spent on the new opening of the Untitled Cleveland Drama, once known as Cleveland’s Burning.  As is customary for me, I seriously  belabor the first few images of everything I write, whether it’s fiction or a screenplay. As I have pounded into the heads of my writing students over the years: DON’T give your reader a chance to put it down!!

By this I mean, keep your opening seamless, keep it flowing, don’t allow for a single question in your reader’s mind about what is visually happening. Be exceedingly crafty about your punctuation, as well. Anything that could cause a  reader to pause, or to question, or to consider his or her own mind, thus causing a break in the flow, is that dreaded gap wherein the book or script can be set aside for something else, indefinitely.

Because of that, I can’t tell you how much time I’ve spent on the first 60 seconds of my script (also known as page 1).  Then, when I felt I finally could sign off on those first 60 seconds, I labored over the next 20 seconds, because now I can’t decide between: the cold open, or jumping into Act One? And since I cannot make up my mind about this, I go back and forth between how I want to craft those next 20 seconds…

In order to still utilize my time efficiently, I set aside my quandary and did some more background research for my character, Caleb Robinson: I watched  Stanley Nelson Jr’s documentary,  The Black Panthers: Vanguard of the Revolution.  I really liked the film and it gave me some critical dates to work with, historically. [However, it does seem that some ex-Black Panthers weren’t happy with the tone of the film, in particular, how it portrayed the dismantling of the Panthers and  Huey Newton’s demise. But there was still a lot of amazing stuff in the film for me to draw on.]

Today, I need to process that from my brain into the script, even though Caleb Robinson won’t become a Black Panther until 1967, and that’s 4 seasons away from the pilot episode. Still, you gotta craft a character from his first scene in order to keep it believable, right?

Well, on that lofty note, I have got to decide, once and for all, if I have a cold open here or am I already into Act One??? I think I will go watch a re-run of Perry Mason and see what hits the page when I’m done doing that!

Thanks for visiting, gang. Have a terrific Tuesday, wherever you are! See ya! 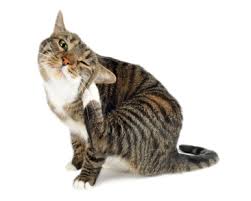 You may recall that I recently wrote a post about my art project — a “Chore Chart” I made for my cats (see somewhere below) in order to get help with the housework around here and about how poorly the cats were doing with keeping up their ends of things.

Finally, it all came to a head the other day, when I unhappily discovered that all my cats had fleas and all the housework had to be done, by me, alone, posthaste. Yes. Cats that never go outdoors; cats living in a house that has had the central AC on all summer long; a house that sits on a property that has had professional lawn care (including certain insecticides) all summer long. And still all 10 cats had fleas.

8 of the 10 cats are either feral or semi-feral rescues that no human being on earth can touch because they are terrified of people touching them, including me, so they require oral, tuna-flavored, meds that I have to buy in bulk from out of state. Luckily they arrived within 2 days.

Friends tried to comfort me in all this by assuring me that it wasn’t somehow “my fault” and that “fleas are really bad this year,” but it didn’t make the chore of getting rid of the fleas any easier. It took about 4 1/2 hours to  launder all the various bed linens, furniture throws, throw rugs, etc.; then vacuum everything, wash down the floor, and then spray everything with Knockout flea spray. (Oh, the things you learn while eternally fostering a feral cat colony in your home. It used to take me several months to get rid of fleas, now it takes me about a quarter of a day…)

When I was finally done, and after I’d taken my shower and collapsed on the bed, ready to get lost in a terrific Erle Stanley Gardner Perry Mason mystery that I’d gotten from the library, my little cat, Fluffy, the one who has cancer, promptly had a stroke right there next to me on the bed.

The immediate after-effects of the stroke lasted nearly 2 hours and required two more loads of laundry from all the projectile vomiting and temporary loss of bladder control (hers, not mine) and then she settled down into a very deep sleep.

However, in the middle of the night, for two nights running, she woke up with a burst of energy and was doing weird things around the bedroom that she hadn’t had the energy to do for several months and it kept me from getting any decent sleep. At every weird sound she made, or every unexpected thing she collided with and knocked over in the dark, I kept lurching awake, saying, “Oh my God, Fluffy, why are you doing that?” as if her little bewildered self needed to explain to me that she’d very recently had a stroke and was also dying from cancer.

She has since settled way down and is somewhat “back to normal,” all things considered.

Then, yesterday, it was my turn to crash. I didn’t wake-up until 9 a.m. — I  am usually up by 5 a.m.  Twelve hours of sleep. And I was still exhausted. So, unexpectedly (and rather happily, as it turned out) I stayed in bed all day, read my library book in its entirety — The Case of the Stepdaughter’s Secret-– and even began re-watching a series of Midsomer Murder DVDs. I watched 3 of them — a total of 6 hours’ worth of Midsomer Murders in one lovely, rainy summer day. I’d been wanting to re-watch them because I’d recently read Caroline Graham‘s terrific mystery that launched the Midsomer Murders TV series, The Killings at Badger’s Drift.

So it was a day full of mysteries on every front — and I found myself making all kinds of notes for The Miracle Cats series, the series I’m writing with my friend, Val, in Brooklyn. (Sadly, her dad passed away over the weekend after a really long illness, so our series has been on hiatus.) As well as notes for my current novel-in-progress, The Tea Cozy Murder Club: A Murder at Parsons Ridge.

I also managed to eat an entire 14 ounce container of Häagen-Dazs Chocolate Peanut Butter ice cream. All by myself. While spending an entire day in bed.

I have to tell you, gang, it was not the worst way to spend 24 hours! I had a blast. And thanks to the flea infestation, I had an extraordinarily clean house to waste all that time in. I couldn’t have asked for a more delightful day. 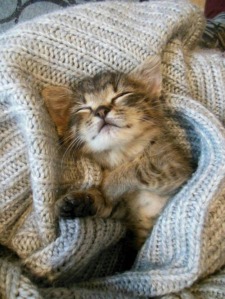