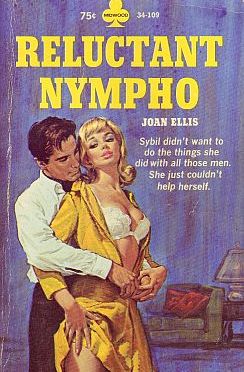 Sybil is the girl up there on the book cover. Doomed to come into her hormonal peak in an era when most Americans were more comfortable with women being one-dimensional!!

(And I’m guessing that the author, “Joan Ellis,” was really a guy.)

But I guess it made for some good, solid reading. Yes, indeedy.

God knows, I was no stranger to these kinds of trashy paperbacks when I was young; they were just everywhere in the early 70s. Just everywhere. But I was not their target audience, that’s for sure.

Wow. Well. that was certainly an unexpected tangent at 6:11am!

What I was intending to write about was something a little bit different. But not much.

Last evening,  I finally did get some energy going. My brain connected. I had Chapter 21 of Blessed By Light open in front of me. I was tweaking some stuff already written there and feeling primed to get some new stuff down, and then suddenly Peitor texted me.

I don’t keep my ringer on when I’m writing but I do keep my phone on the desk, so I saw that he was sending text after text after text. Which always means something important is on his mind, so I looked at the texts. And then suddenly, Valerie in Brooklyn started texting me, too. She’s working on some sample cover art for me and I needed to hear from her, so I was trying to read that, too. And then suddenly my dad called.

All of this happened at once, completely at the same time, at around 7 in the evening.  And no one had texted or called me all day. Suddenly, all my mental energy was re-routed toward my phone, which basically derailed any creative stuff getting written yesterday.

But the stuff from Peitor was really cool. He and a handful of creative people in L.A. (except for Peitor, I think the others involved are all women), anyway, they’re starting an artists’ retreat in Perugia, Italy.

Peitor lives a good portion of the year in Italy and England. And he agreed to take over this property for a friend in Italy and run it. And it’s amazing and really lovely.  And it’s upscale, you know. Really nice. It can house & feed 60 artists at one time.

Peitor is a composer and producer, and he scores films and TV and stuff. And the women onboard are, like, award-winning photographers for National Geographic, and artists in other disciplines, and other writers, as well as TV & film executives. All based in L.A.

And, of course, I was, like, YES!!!! with a zillion exclamation points. We then texted for over an hour, hashing out the details. So you can see why I never got back to the novel last night. My mind went off into this whole other realm.

I’ve taught writing before. It’s not an easy thing to do. And I was very picky about who I would take on as students, because it’s hard enough to help good writers become better writers.  Trying to teach someone who thinks they kinda might like to write…that’s just not even in a ballpark that I know how to show up in.

So, I can see how an undertaking like this particular retreat could require an enormous amount of energy from me, directed at a lot of people at once, and people from all over the world. I speak French and a little Mandarin Chinese, but that’s it.  Everyone’s gotta speak English, otherwise I’ll be useless. Yet, just because a writer might speak English, it doesn’t mean they’re thoughts slide together in the same way that a native speaker’s does, right? Still, I find the whole idea just really exciting, however it turns out.

But I think I totally passed out from exhaustion before 11pm last ngiht and then I was up at 4:11am, all excited about life and unable to fall back to sleep. Teaching that guy piano, and now this artists’ retreat in Italy. On top of all the other really cool projects I’m doing right this very minute.  I was also lying there wondering what seat I’m going to get when the tickets go on pre-sale for Nick Cave at Town Hall tomorrow morning. I know I’m going to get “a seat,” but will it be the seat I want? What is the seat I want? Actually, the seat I want is, you know, on the piano bench right next to him, but I’m thinking that’s not actually a seat that’s being offered…

I finally got out of bed at 5am, went downstairs to merrily feed the many scampering cats. We listened to The Big Jangle by Tom Petty & the Heartbreakers all during breakfast. What a great CD. (It’s from the Playback collection.) It has all of my favorites from that period when I was 18-21 years old. Gem after gem, and not one of them longer than 3 minutes.  It’s pretty much: verse/chorus, verse/chorus, bridge, chorus, out. But just wonderful rock & roll songs! All of them infused with that intense attitude he had when he was young.

It all just made for a great start to another sunny spring morning around here.

(Oh, you’ll notice that I reloaded Boy, If You Want into the music player. This is a demo we made in my boyfriend’s bedroom, on his 8-track, in 1984. He was a drummer in a different band. We used his bass player and a lead guitar player that they knew. It’s just a demo, the sound quality on the acoustic guitar is terrible, but I always liked the demo, overall.)

Okay, on that note! I’m gonna get crackin’ around here on the novel because I know for sure I have 2 phone calls coming today that I need to take. I leave you with one of my favorite Tom Petty songs of all time! (Isn’t it everybody’s??!!) Here Comes My Girl, from 1978!!!

All right, gang. Thanks for visiting. I love you, guys. See ya!