I am, of course, referring to the dawn of a brand new day.

I feel like absolute garbage.  Respiratory gunk and a swollen throat — both stemming from that weird pas de deux that I did with my vacuum cleaner the other day. (See some sort of post below.)

I wish I could just go swim in the sea somewhere.  I have no idea if it’s true, but I always think that submerging oneself in saltwater – the ocean – will wash away everything that’s making it so you can’t breathe.

And of course it snowed again here during the night, so the thought of going swimming in the sea someplace where it’s hot oddly makes all this congestion garbage in my lungs today feel a lot worse.

I’m also wishing I could go down to some river somewhere and get a full-submersion baptism and have that dove of peace fly out of the top of my head, taking with it all the things that fuck me up in this world.

I’ve having so many distressing issues going on in my head at once these days that I just can’t deal with them. (I’m guessing that’s another reason why I can’t breathe right now.)

I had so many frustrating and just plain bad dreams last night, too. By anyone’s definition, my sleep was not restful. I know that I’m trying to come to an understanding about several different things that, frankly, are just plain impossible for me to figure out.

You know, like when you simply haven’t been dealt enough cards. It’s not that the cards I’ve been dealt are bad, necessarily, it’s that I feel I just don’t have enough cards in my hand to figure out how I’m supposed to play this hand — to live a better life right now.

In some ways — the plays, for instance — life is really going good. In other ways, things suck and I’m not sure how to make them not suck.  I know that forgiveness is key, but sometimes I get so darn tired of forgiving people. (ME: Why don’t you just do the right fucking thing for Christ’s sake?!)

I know; I’m a minister. That’s not a good sign. One of the reasons Jesus refuses to give me my own flock to lead around, I’m guessing!

I know that giving myself a break is also key, but I’ve never been very good at doing that. I’m always the first on my list to be merciless with, regardless of what the topic is.

So here we are, with another brand new day to try to get it right this time, and I’m just so fucking angry, disillusioned, frustrated — you name it; it’s not got a good feel to it but I’m feeling it anyway.

And my daddy cat is sick, too, the only cat in the colony that actually interacts with me, so I sure don’t want to lose him. Well, I don’t want to lose any of them. But I’m trying to get him to take his medicine so that he will start feeling better (ME: Do as I say, cat, and not as I do, because I’m feeling like garbage here, too.)

One happy thing. A record I ordered probably 6 months ago is finally supposed to arrive today. I have every single song on this 2- album set, yes I do! Most of the songs, I have on several different albums. But they have included one – yes one – song that was never released before, so naturally I had to buy the whole thing. They dropped the new song on YouTube the other day, but I refused to listen to it. If it’s the only song on the collection that I haven’t heard yet, I want to put it off as long as possible. 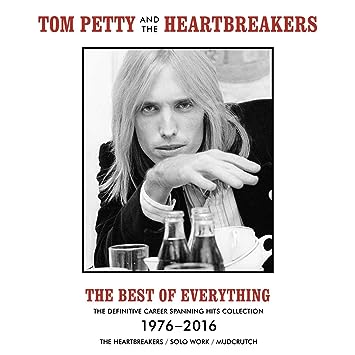 (Another thing I’m really getting sick and tired of is Tom Petty being dead. Enough of that already, okay? Get up, dude! It’s not funny anymore.)