JESUS (speaking quietly to Simon-Peter): “Though I had nothing to do with it, it was an actual miracle — her cats did not go near that fucking tree.”

Yes!! From Christ’s mouth to your ears! My cats did not go anywhere near that tree.

You know how cats are so good at math?  How you can actually see them calculating the distance of something they wish to jump up on to?

Well, when they looked up at the tree, they saw this:

Which led them to think THIS:

And the problem of my cats shredding the fronds off of my helpless palm tree,  eating the fronds and then vomiting them back up all over the carpeting has at last been solved!!

But it looked like a great show. And oddly, it seems like the folks in Los Angeles are more of the rule-following ilk than the folks in San Francisco were. I find that a little ironic. You’d think that in LA, people would be more likely to do whatever they want, but almost all of the photos from last night were from that brief period at the start of the show where they were allowed to take photos. Not so in SF, where you would think they might be more respectful of the other people in the audience…

Anyway, it’s over. I just can’t believe it. For four months, I had my tickets to see him in NYC, and now not only are the NYC shows long gone, but now the tour is completely over. In a heartbeat.

All righty. Well, it is just a really cool day here today, gang. Perfectly fall-like outside. Rainy, chilly, wet autumn leaves scattered everywhere. It just feels so cozy to be inside, looking out at the rain. Drinking my cup of coffee. I have to work on some technical stuff for Tell My Bones here today, then work some more on Thug Luckless. Then maybe go back and do some more work on Tell My Bones. I think it’s just going to be a nicely paced day.

Last night, I spent a lot of time working on Thug Luckless and so  it was kind of late when I got around to doing yoga. I had the lights down and I was listening to the 2nd half of Ghosteen. I don’t know if that was the very best idea. You know how, when you’re doing yoga, you’re so focused and anything you hear goes right into your consciousness. I know I keep saying this, but Ghosteen is truly an intensely beautiful album and just so incredibly sad — to me, anyway.

I was in the cool-down part of the yoga when the final song came on (called “Hollywood” but I keep thinking it’s called “Malibu”). The cool-down part of yoga is such a meditative mental place, and that song — the part where Kisa is unable to accept yet that her baby has died, she thinks it’s only sick. Oh my god, that just washed over me like a tidal wave — of love, of loss, of longing. That whole song is almost unbearably exquisite. You should go listen to it wherever you listen to your music.

Okay, I’m gonna scoot!! Have a beautiful, beautiful day, wherever you are in the world. Thanks for visiting, gang. I love you guys. See ya! 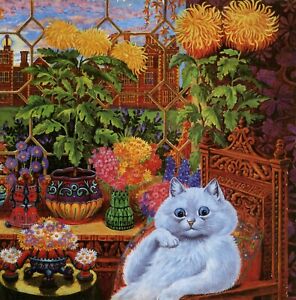