Well, today did not go anywhere near as planned, so I am posting this tonight, and it will serve as tomorrow morning’s post, gang.

So I went outside and took a walk. I tended to my petunias. I vacuumed the house again. I finally watched the end of Miss Fisher and the Crypt of Tears on Acorn TV.  Nothing could re-direct my focus. So I finally gave up.

I’m hoping that by tomorrow, my thoughts will be my own again and I can get back on track here.

But it is indeed a truly lovely evening here tonight. I sat out on my kitchen porch for quite awhile and I thought, well, maybe the blond boy will drive by on his motorcycle, and I can see him sort of up close rather than just from my upstairs window — and the very moment I thought that, he walked right past me! Right past my porch. He wasn’t on his motorcycle.

And I figured that since it’s a Friday night on a holiday weekend and he’s a teenager, he’s probably heading to some sort of party/gathering where everyone is drinking beer and smoking weed around a bonfire — and he doesn’t want to risk fucking up his motorcycle. So I thought that was pretty cool. (And I also thought it was pretty cool that the very moment I thought of him, he was suddenly standing right in front of me…)

So that was my big entertaining event here in Crazeysburg this evening!

Now I’m going to find an old movie to watch (Cary Grant and Grace Kelly in Hitchcock’s To Catch A Thief is looming large in my queue, even though I’ve seen it many, many times. I just love it! The French Riviera, the fashions, the sexy rapport between Grant & Kelly…) (If that doesn’t make me stop thinking about my dad’s prostate I’m guessing that nothing will!) 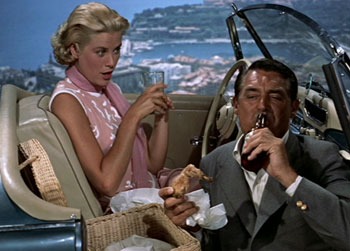 Okay, well, I hope that you have a great Friday night if you’re reading this early — or a terrific Saturday if you’re reading this tomorrow! I was thinking some more about that new Nick Cave tee shirt on Cave Things (see my post from earlier today) and it struck me as really cute that the tee shirt says “don’t touch me” but the spider on the tee shirt is made of felt and sort of calling out to be touched. And apparently, the drawing of the spider is based on an actual tarantula trapped in amber that he owns, and of course the line “don’t touch me” is a lyric from his song “Girl in Amber.” So, well, that’s one of the many things I was thinking about while trying to not think about other things that I was thinking about today!

And that’s a round about way of saying that I’m leaving you with “Girl in Amber” from Nick Cave & the Bad Seeds’ Skeleton Tree album from 2016. I think I’ve posted it here before, but this is the version from the Live in Copenhagen movie, not the official video. It’s a really beautiful song, and even while I don’t completely understand it, I identify with it very intensely, for some reason. Okay, so enjoy! And have a great Saturday. Thanks for visiting. I love you guys! See ya.

And now in turn, you turn
You kneel, lace up his shoes, your little blue-eyed boy
Take him by his hand, go move and spin him down the hall
I get lucky, I get lucky cause I tried again
I knew the world it would stop spinning now since you’ve been gone
I used to think that when you died you kind of wandered the world
In a slumber til your crumble were absorbed into the earth
Well, I don’t think that any more the phone it rings no more
The song, the song it spins now since nineteen eighty-four
The song, the song, the song it spins, it’s been a spinning now
And if you’ll hold me I will tell you that you know that

The song, the song it spins, the song, it spins, it spins no more
The phone, it rings, it rings and you won’t stay