For any of my readers who perhaps celebrate Rosh Hashanah! I hope you’re having a “shouting and blasting” sort of weekend, wherever you are in the world. 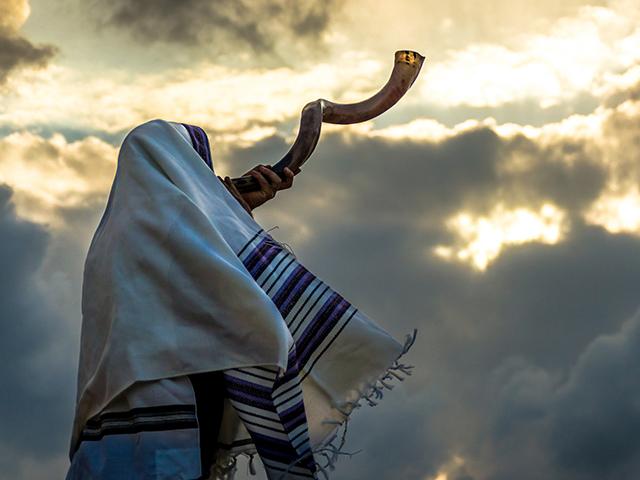 Oddly enough, I could not find any vintage illustrations of cats blowing the shofar (or even the chauffeur for that matter!!), so I had to settle for something tasteful as well as G-rated…

(Yes, I’m in a much friskier mood today than I was yesterday…)

(And, yes, I was having a “blast” scampering around naked in the freezing cold and singing “Good Morning, Good Morning!” from the musical Singin’ in the Rain, at the top of my voice and making my cats go berserk –)

(– and I realized that it is now official: I am no longer twelve years old, but more like seven!!)

(However, rest assured that by the time I was downstairs where all those many enormous windows are, I was wearing my rather matronly-looking lavender-colored chenille bathrobe…)

(And by the way, if you don’t know that video clip up above there from Singin’ in the Rain, you gotta watch it!! It’s a bona fide classic!!)

I have so much writing to tackle today, gang.  I didn’t make any true headway in 1954 Powder Blue Pickup yesterday because I’m still trying to figure out two key scenes in my mind.  Trying to make sure they make emotional sense for all the various characters involved.

I know! Leave it to girls to do something unexpected and screw up everything!!!

So that’s where I’m at this morning.

It’s a gorgeous day here, now that the sun is up, too, although it’s still a bit frosty. For some reason, I’ve got more laundry to do here today, so I’m gonna get started on that and then get down to writing.

I hope you are planning to have a great Saturday, wherever you are in the world. Thanks for visiting, gang. Apparently, yesterday was something like the 31st anniversary of the release of Bob Dylan’s album, Oh Mercy.  And first thing this morning, I saw the results of a poll taken by one of the Bob Dyan-fan accounts I follow on Instagram, and apparently most people voted that “Most of the Time” was their favorite song on that album. And while I agree that it’s a really good song, my favorite from Oh Mercy is “Man in the Long Black Coat.” And I immediately played it. And so I leave you with it here today!! Enjoy, gang!! Okay. I love you guys. See ya.

“Man In The Long Black Coat”

Crickets are chirpin’ the water is high
There’s a soft cotton dress on the line hangin’ dry
Window wide open African trees
Bent over backwards from a hurricane breeze
Not a word of goodbye not even a note
She’s gone with the man in the long black coat.

Somebody seen him hangin’ around
At the old dance hall on the outskirts of town
He looked into her eyes when she stopped him to ask
If he wanted to dance he had a face like a mask
Somebody said from the bible he’d quote
There was dust on the man in the long black coat.

Preacher was talking there’s a sermon he gave
He said every man’s conscience is vile and depraved
You cannot depend on it to be your guide
When it’s you who must keep it satisfied
It ain’t easy to swallow it sticks in the throat
She gave her heart to the man in the long black coat.

There are no mistakes in life some people say
It is true sometimes you can see it that way
But people don’t live or die people just float
She went with the man in the long black coat.

There’s smoke on the water it’s been there since June
Tree trunks uprooted beneath the high crescent moon
Feel the pulse and vibration and the rumbling force
Somebody is out there beating on a dead horse
She never said nothing there was nothing she wrote
She’s gone with the man in the long black coat.