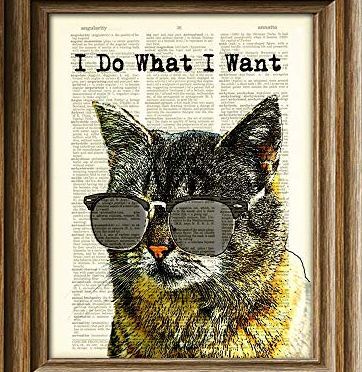 I am just in the most amazingly blissed-out mood this morning.

The weather here in Crazeysburg is perfect. Just unbelievably perfect. Cool, but still warm enough to have all the windows open – yay!!

When I finished meditating, I opened my eyes and discovered that I was looking out a section of the window where I could just see the sun coming up through the leaves of my maple tree. Just absolutely dawn beginning, you know. And I don’t mean this Dawn, either. Although there is nothing at all wrong with them!

But just to see that sun coming up right at that moment, you know? It made my heart smile.

I think today is going to be a really good start to a peaceful holiday weekend around here. Stateside, we celebrate Labor Day on Monday. Labor Day used to be a holiday celebrating Labor Unions, but now it’s more of a holiday that celebrates shopping and, thus, all those non-Labor Union workers are forced to work!

When I was a wee bonny lass growing up in Cleveland, holidays were holidays and nobody worked. Cleveland was what was called a Blue-Collar town; lots of strong (rather corrupt) labor unions, and so lots of holidays, including Sundays.  On Sundays, Cleveland shut down, except for gas stations and an occasional restaurant. It was a day for going to church and then being with your family.

It is kind of amazing how hugely that has changed in this country and gone to the extreme side of commerce and consumerism, but far be it from me to try to turn back that tide.

I don’t know if it’s still like this in NYC or not, but, in a similar vein, it used to be that if you didn’t go to the liquor store in NYC before it closed on a Saturday night, you would be booze-less all day Sunday. Now, at least around here, you can buy booze on Sundays, but most places make you wait until after 12-noon. You know, give the churches half a chance to dissuade you…

Well, I seem to have digressed!

Yes, a holiday weekend is upon us and I know I don’t have to tell you how I am going to spend mine, right??!! Working on the play! Every free fucking minute.

I did get into a very interesting place with it yesterday — I’m still in this really difficult segment that I have been in for something like 2 weeks already. And, yes, the director has since gone back to NYC. But he has still been very supportive and patiently focusing on that “one step at a time” idea. (Whereas, I focus on the “goddammit, why can’t I write this fucking play???!!” idea.)

But yesterday, I found my way into some dialogue that was finally resonating for me, so I’m hopeful that I have at last really found my way in. The overall, arching premise is there, because, as you perhaps recall, I have already written this play 17 hundred times!! But the characters have little to no depth in regards to the new dialogue. So that is where I am hoping to have my breakthrough.

I talked with Valerie in Brooklyn for awhile yesterday, and she was experiencing the same shock & sadness regarding the summer being over and not being ready for it yet. And she concurred that July flew by in a mere heartbeat. So it made me feel kind of better about how I’ve been feeling over here. You know, now I know I’m not alone in this melancholy over the fleeing of summer.

Oh! I had an interesting dream about Nick Cave last night. He wasn’t physically in it; he had sent me 3 things. My favorite of the 3 being a bowl of macaroni & cheese. It was in a really round, white bowl. And it was made with white cheese instead of orange cheese, so a lot of whiteness was going on there. But it was hot and I was really happy, because macaroni & cheese is probably my favorite thing in the world.  And he had sent me 2 identical videos, compilations of stuff, and the videos were digital streams but I could still hold them in my hand. However, I woke up before watching the 2 videos, or even eating the mac & cheese.

Still, I thought that was interesting and I have no clue what it could have possibly meant. And,  you’ll notice, that once again there is that duplicate thing happening — I posted a couple months ago about how, when I dream about Nick Cave, there are always 2 of the very same thing in the dream. Last time, he emailed me 2 really large panes of glass in the shape of Australia. And this time, 2 digital videos that were the same.

And on a related note!! Not a whole lot came out of Norway last night on Instagram. And only one of the posts was in black & white this time, so, clearly, last time they were doing that excessive “posting in black & white” business on purpose– you know, to specifically drive me crazy.  I’m going to try to not hold it against them as an entire country, though.

And people from Helsinki are still posting. They seem to have just had an amazingly amazing time. I’m not being facetious, either. And the photos from inside the theater itself looked really cool — stairways that seemed to be lit up and looking like they went off in interesting directions to nowhere; M.C. Escher-like. (I know!! It’s so hard to believe that I’m writing a Pulitzer Prize-winning play while still finding time to endlessly ponder the stairways of theaters I will never visit in my lifetime that are thousands of miles away!!)

All right, gang! I’m going to close and get to work around here. I leave you with this!! It’s actually a really great pop song, gang! You should listen to it!! I’m posting it only because of the aforementioned thing up there. I hadn’t actually thought about the song in decades,but I used to just love it. And so I just played it and discovered that I still love it!

(And while playing it, I recalled, vividly, that I was watching the Tony Orlando & Dawn Variety Show on TV that night that I was babysitting in the swinging 1970s apartment complex when I was 14 and the dad came home early, wanting to fool around.  That was the time I called my 16-year-old girlfriend, to see if she wanted to come over and fool around with him instead, because he creeped me out and I just wanted to go home. And so she did.) (And I remember her standing under my bedroom window, later that evening, and tossing pebbles up to it so that I would come to my window. And  I did. It was summertime. We weren’t in school. And she told me that they’d fucked on the living room floor and then the mom came home early, but they didn’t get caught. But she said that the mom & dad got in a fight anyway because the mom came home and found a different babysitter! I mean, my girlfriend actually called all that out to me, out loud, up to my window. What a weird era that was.  And I don’t know if I said it out loud or only thought it, but I do remember being appalled that they had sex while his kids were sleeping upstairs.)

(This is also the same girl I posted about several months ago, where we got arrested and taken to jail that same summer and her dad blamed me. He blamed me for everything she did. I’m not overstating that in the slightest. Every time that guy laid eyes on me, he wanted to kill me.)

Anyway. I leave you with a really cool song this morning that has some really unexpected memories. Enjoy!! Thanks for visiting, gang! I love you guys. See ya!

The stars won’t come out
If they know that you’re about
‘Cause they couldn’t match the glow of your eyes
And, oh, who am I
Just an ordinary guy
Trying hard to win me first prizeOh, Candida
We could make it together
The further from here, girl, the better
Where the air is fresh and clean
Hmm, Candida
Just take my hand and I’ll lead ya
I promise life will be sweeter
And it said so in my dreams

The future is bright
The gypsy told me so last night
Said she saw our children playing in the sunshine
And there was you and I
In a house, baby, no lie
And all these things were yours and they were mine

Whoa my, Candida
We could make it together
The further from here, girl, the better
Where the air is fresh and clean
Hmm, Candida
Just take my hand and I’ll lead ya
I promise life will be sweeter
And it said so in my dreams

And, oh, who am I
Just an ordinary guy
You know, I’m trying hard to win me first prize

Oh my, Candida
We could make it together
The further from here, girl, the better
Where the air is fresh and clean
Whoa my, Candida
Just take my hand and I’ll lead ya
I promise that life will be sweeter
And it said so in my dreams