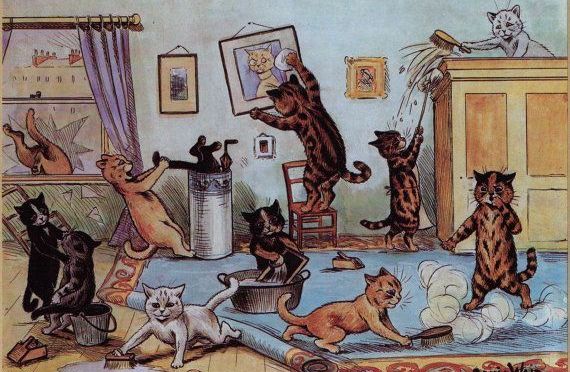 Yes! So far, it’s a terrific Tuesday! I’m teaching the cats how to use a vacuum cleaner!  (It seems fair, since they shed more than I do and I have way too much to do and they’re always just sitting there, staring at stuff.) (At dust, most likely.)

Oh, before I forget, I uploaded another old song. (If you’re on your phone, you have to turn it sideways to see it.) This is a really terrible demo, which is unfortunate because I love this song. But it’s the only version of it that was ever transferred to MP3.  The demo was made back in 1985 on the 4 track in my bedroom, and then we took it to my boyfriend’s bedroom (a drummer), to his 4 track at his place, and he added some drum & synth stuff.

We had a really fun time making it, but it was only ever intended to be a reference demo to take to the studio. And, alas, it shows! But if you listen to it, try to hear the fun & not the horrible quality of sound!

Anyway! Yes, it’s Tuesday!! And I approach this day knowing full well I have too much to do!

In another brief conversation I had with Gus Van Sant Sr. the other day:

HIM: “Well, who’s your agent now? Who’s managing you?”

ME: “Nobody. I suppose I’d better do something about that, but I just, you know – me and agents….”

I won’t repeat the rest of the conversation!! It is sufficient to say, I need to bite the bullet and stop doing everything myself because my life is getting a wee bit unwieldy over here.

Yes! I will indeed be contributing a brief segment of my new memoir-in-progress, In the Shadow of Narcissa, to Edge of Humanity Magazine once a week or so. This will be a condensed version of what will appear on my own site.

Yes! This means I have to be sure to write something new (& publishable) at least once a week, and I am now up to my eyeballs with revisions of Tell My Bones because Sandra will be arriving pretty much any moment now to begin rehearsals.

I’m excited.  I’ve been following them for a while and it’s a whole worldful of other readers.

I’m not really sure why I suddenly found this memoir of my childhood springing out of me, or why I felt I needed to lock myself into a weekly publication schedule for it. I’m still doing my Inner Being journaling every morning, and re: the new memoir, it said: “To a point, it serves you to examine these things because it is assisting your journey out of the DARKNESS.” (That word actually came out capitalized.)

(You should keep one of these journals, gang. They are  incredible and surprising and illuminating.)

I don’t consider myself someone who is still in darkness. However, by writing this memoir, and facing things about my adoptive mother — I have always tried to focus on the good side of her and block out the bad, but that was part of her narcissism: training me to do that — more and more I see that it is in fact a miracle that I survived my childhood. I did attempt suicide twice, but my will to live, which was always bubbling underneath the nightmare, was just ridiculously strong. It’s sort of startling to recognize that now; to marvel at the odds that I am even still here. So I guess that’s the purpose the memoir is serving for now.

Obviously, I’m hoping that the memoir will be helpful to someone else out there who will read it. Assuming I manage to drag something uplifting and helpful out of that whole mess.

Still, it was good to sort of see it. Not to dwell on it, but to acknowledge it and try to process it somehow.

Yesterday was actually the “anniversary” of me being committed to a mental hospital after my first suicide attempt in 1975. I was put in there right before my 15th birthday. They actually gave me a birthday cake in there. However, I was on “suicide precaution,” which meant that for the first several weeks of my incarceration (I was literally incarcerated – I was there against my will and in a building where we were literally locked in and the windows were covered in this heavy mesh stuff that you couldn’t break out of.  And everything inside the place was locked. Everything.  Every drawer, every cabinet, every door, every window. And any room where you could possibly be alone in it — that was also locked. In that building, we were treated like criminals but it was only because we were all suicidal.)

Those first few weeks in there were so frightening to me, because I was always confined alone in my room. And of course, everyone outside of my room was “crazy.”  And if I needed to use the bathroom, Security would accompany me. It was a communal bathroom, which in and of itself I hated. Just no privacy at all. Ever. And the Security person (a man) would follow me right in to the bathroom and just stand there while I tried helplessly to just do what I needed to do in there. He was protecting me from myself, I guess. But it was awful because I was only 15, and really shy, and of course my period had come because it always managed to come when it was least wanted.

It was just awful, those first few weeks.

But what eventually sank in was that my mother was not able to get at me in that place — they wouldn’t let her visit me for a long time– and for the first time in my 15 years of life, I had a sense of peace. It didn’t last long, but it did come.

Anyway, I have to scoot. I have been alerted via a text from Sandra that we are having a phone chat in 5 minutes…

Have a terrific Tuesday, wherever you are in the world, gang! Thanks for visiting. I’m going to leave you with this unlikely song. I actually listened to it last night for the first time in over 40 years. It was the song that was playing on the AM radio when they were telling me to get into the car because I was being taken to a mental hospital, for my own protection or something insane like that. It was a song I associated closely with Greg, my boyfriend who had died. By then he had almost been dead one year. And the song was unbearable for me to hear, even on days when I wasn’t being scurried off to a loony bin .

But I played the song last night, and I lived through it. I’m hoping you will, too. I love you guys. See ya!

In the corner of the bar there stands a jukebox
With the best of country music, old and new
You can hear your five selections for a quarter
And somebody else’s songs when yours are throughI got good Kentucky whiskey on the counter
And my friends around to help me ease the pain
‘Til some button-pushing cowboy plays that love song
And here I am just missing you again

If I had a dime for every time I held you
Though you’re far away, you’ve been so close to me
I could swear I’d be the richest girl in Nashville
Maybe even in the state of Tennessee

But I guess I’d better get myself together
‘Cause when you left, you didn’t leave too much behind
Just a note that said “I’m sorry” by your picture
And a song that’s weighing heavy on my mind