Yes, except for the times I was blogging, I actually stayed away from my desk throughout Christmas Eve and Christmas Day.

And I made every effort to watch new things, at least on Christmas Day. I did watch one old re-run of Perry Mason, which I loved. Even though I’d seen it a million times. But then I switched to my watchlist to find only new stuff.

And I’ll tell you, it’s just weird. You know, I often see trailers of new shows that look just so cool. And then the shows go on to be mega-hits and win awards and stuff, but when I try actually watching them, often I can’t even get halfway through the first episode.

And yesterday, I thought I was going to really seriously love Good Omens, but I only got halfway through the first episode before my mind started to wander again.

I keep thinking that maybe I should try again, but jump in somewhere mid-season in all these popular shows. Maybe they’ll resonate better for me, farther along in the series. But then I run into that problem I have with not wanting to spend time away from my desk, so it never happens.

I was so disappointed with Good Omens. I really thought I was going to love that. So maybe I will try again some other time. However, last night, I switched back to my watchlist, and found a movie that had been in my queue for a couple years already (yes, this is how little I watch — or stream — TV). It was loosely adapted from a novel I loved, that came out in 2005 or so. I was sort of stunned to see that the movie is already old — 2007! But it counts as new because I had never seen it before. 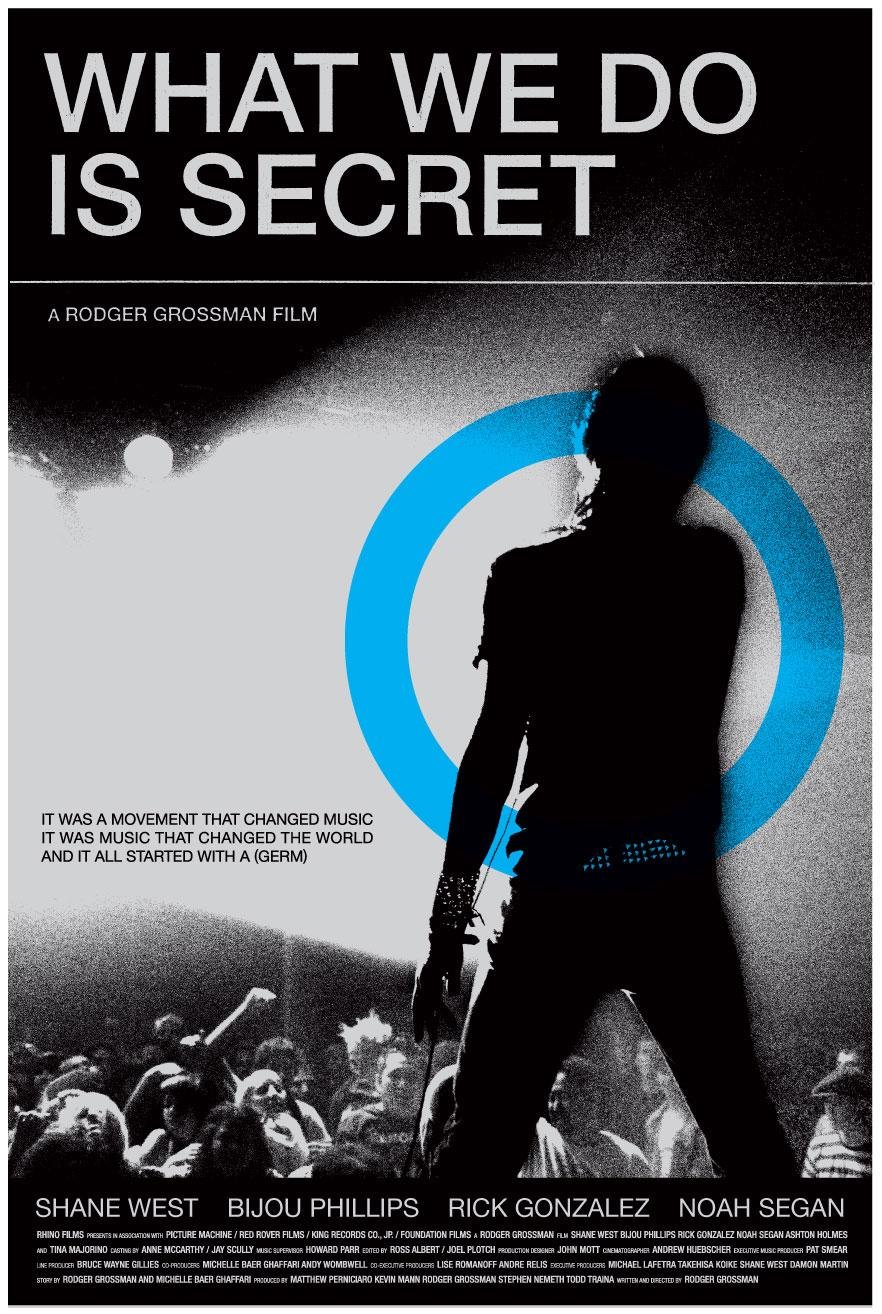 What We Do Is Secret — the story of Darby Crash and the Germs, an LA punk band from back in the mid-70s. He committed suicide (an intentional heroin overdose) in LA — ironically enough, on December 8, 1980, the same day John Lennon was killed in NYC.

I thought the movie was great, you know? Not necessarily great cinema, but just so well acted and so good at capturing the era and the feel of the story it was trying to tell. It’s a small movie, but I never lost interest in it for even a moment.

It’s not really anything like the novel, though — they are two distinct entities, but both are good and stand strong, each by themselves.

So I don’t know. I tried. I tried to plant myself in front of something brand new. But what wound up grabbing me was something already 12 years old that reminded me of my late teen years and the first year in NYC, and the music scene back then, and all the intense musicians that I knew (including myself, I guess).

I never really liked punk rock too much, although a couple of the bands I really loved (Patti Smith Group, primarily) were put under the punk rock banner but, in my opinion, were actually something so much more. But then, at the tail end of punk, came the New Wave banner and a whole lot of bands that fell under that banner were just really cool. To me, anyway.

And then I found it so intensely cool and interesting that the movie ends with Bowie’s song from 1972, “Rock N Roll Suicide,” which was the very first song in my own life that helped keep me from trying to kill myself. It was a very important song to me. And it worked for awhile. Eventually, though, in the summer of 1975, my adoptive dad told me that I should just go ahead and kill myself because no one wanted to deal with me anymore. So I went inside and tried to kill myself and then wound up in the mental hospital — which is what the chapter “Captivity” is all about. (Well, it’s about sex in the mental hospital.)

You know, I realize that we can’t make people behave in a way that isn’t natural for them, and I know it sounds trite to say this, but it really just seems to me that if people could just communicate so much pain in the world would go away. I include myself in that, too. By the time I was 14, 15, I could not talk to my parents about anything. Certainly by the time I was 15, I was so fucked up on drugs most of the time, that trying to communicate was pointless. Still, the fact was that I was unable to talk about anything. My dad was pretty heartless, but he didn’t know that I was being sexually assaulted and raped by all those guys — he had no clue. I don’t think he even knew that Greg had been killed or who Greg had been to me, to my life. My dad lived in another city, had re-married and was in a whole other world. By then, I couldn’t talk to him about anything.

And my adoptive mom was just so abusive. She wasn’t physically abusive anymore, but she had the emotional and mental abuse thing down like a science. She terrified me. I was in constant anxiety mode whenever she was around me. I totally lost my ability to communicate. So when my dad told me it would make everyone’s lives easier if I killed myself, he overrode anything David Bowie was trying to convey.

And then, even in the mental hospital — man, excuse the pun, but that place was crazy. What I learned in that place was how to fly under the radar, you know? To not get caught at anything, and to finally tell the doctors what they wanted to here so that I could get the fuck out of there. I wasn’t any better when I got out; I was worse. Because no one in that place had been able to find out what was really wrong with me — what had happened to me. Because I wouldn’t talk about it. I couldn’t figure out how to tell anyone. I could not communicate — it felt life-threatening to me.

But it was just ludicrous — what was going on in my life that my parents knew nothing about. I remember one Friday night in the early summer of 1975 (this was already several months after I was actually raped), I was home alone and talking to a girlfriend on the phone in my room, and I heard someone down at the front door. So I said, “Hold on a minute, there’s someone at the door.”

But when I went down to see who it was, these 3 guys from school jumped me and dragged me off to the woods, and had me stripped out of my clothes in a heartbeat, and I was fighting them the whole time and yelling at them to stop. And then one of the guys said, “If you don’t quit fighting us, Marilyn, this isn’t going to be any fun.”

He actually said that. I was flabbergasted. I said, “Just give me my clothes back!” So they gave me my clothes back. I got dressed, went back home and my girlfriend was still hanging on the telephone. “Where did you go?” she said. “You took forever.”

That kind of shit would happen to me a lot after Greg died. It got so that I was afraid to leave the house. Afraid to go to school. Afraid to walk home from school because the path home was through those woods — which bordered an old abandoned rock quarry, where there was a cave that the guys from school had built a little fort in. That stupid fort was some scary shit. It seemed like there were always guys waiting for me around that fort.

Anyway. I digress rather regrettably. I really just wanted to say that it was so cool that at the end of What We Do Is Secret, Bowie’s song “Rock N Roll Suicide” played as the credits rolled, and I felt, you know, like I had survived my own life. So that was good.

And on that note, I’m gonna scoot and get started here! 2 days away from my desk felt like an eternity! I am eager to get back to work. Thanks for visiting. Enjoy Boxing Day, if you live someplace where that is celebrated. If not, enjoy the day after Christmas! I love you guys. See ya!

Time takes a cigarette, puts it in your mouth
You pull on your finger, then another finger, then your cigarette
The wall-to-wall is calling, it lingers, then you forget
Oh, you’re a rock ‘n’ roll suicide

You’re too old to lose it, too young to choose it

And the clock waits so patiently on your song
You walk past a cafe but you don’t eat when you’ve lived too long
Oh, no, no, no, you’re a rock ‘n’ roll suicide

Chev brakes are snarling as you stumble across the road