My mood is totally tanking around here.

I awoke in a reasonably good mental space. Not 100% sure why it’s tanking — and tanking so rapidly. But I think it has something to do with the  2 chairs I acquired yesterday.

This is not one of the chairs but they look exactly like this: 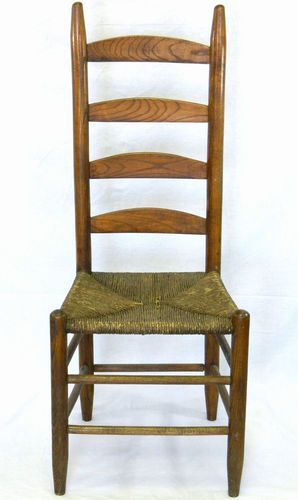 I love ladder back chairs, and the 2 that I got yesterday are really old and really well made.

They came from that little house across Basin Street from me. The son was getting rid of what little was left in the house, and I was, like,  “You’re kidding! Two extremely well-made chairs that I love, just for free? Just like that?”

And of course, I was also thinking: What a relief. You can never have enough chairs for the dining room, once you put the leaf in the table. You always need extra chairs.

And I was really just so happy to have these chairs. And I put them in the dining room, against the wall, and I was just really happy. They are so well-made.

And then this morning, it was that thing that happens to me all the time — where I realize that the world in my head has absolutely nothing whatsoever to do with the life I actually live nowadays. I don’t need more chairs. No one ever comes to visit me. I never have dinner parties anymore. And it has nothing to do with COVID, either.  On those rare times when my birth mom comes here, or my sister comes over, we always sit at the kitchen table. Other than that, no one ever comes over and the other rooms in my house are occupied only by cats. (The cats have not said, yet, whether or not they like the new chairs.)

Anyway, I guess that sort of started me on a little downward spiral. Not so  much the idea that I don’t entertain anymore (or even cook), but the idea that the world in my head is so different from the world I’m actually living in, in the physical.  Even though I know this has been happening to me — I’d even say “increasingly” — since moving into this house, sometimes it really just jolts me. The old life is gone. Even though the life I have now is the one I actually love, the old life is gone and probably isn’t coming back.

I must add here that the latest virus stats were released for this area yesterday, and the county where I do all my marketing had a slight resurgence — 177 active cases (this is still really good compared to where it was at all summer). But here in Muskingum County, we have only 99 active cases, and here in the zip code area where I live (a zip code is an area serviced by one specific post office), we have zero active cases. Yay!! And Muskingum County has still only had 3 deaths from the virus since the outbreak. (This compares to 166,000 currently active cases of the virus in the entire State of Ohio, and a total of 5000 deaths, overall.)

So, you know, this weird world I live in in my head, where everything is just really beautiful all the time, is compounded by the fact that Muskingum County exists in some sort of make-believe place, too.

I don’t suppose there is any real harm, at this point, in living 2 parallel lives that will never meet: the one in my head, and the physical one that I “live.” And I don’t suppose there’s any real harm in the fact that I seem to be regressing way past 12, to about 7 or 8 years old now — judging strictly by my current daily/nightly interests in life (see a post from a few days ago).  (BTW, I am finally remembering to do yoga at night now, but I only do it while I’m streaming reruns of The Monkees.)

The main thing that really sticks out in all this is, of course, my really grown-up car.

In the past few days, I have gotten several very nice compliments about my car. (The molten lava -colored Honda Civic that still looks brand-new but is in fact a year old now. Like me, the car is curiously not aging.) Even though I accept the compliments about my car graciously, it was foisted upon me by the Honda dealership. Plus, I think that St. Christopher (to whom I actively pray whenever I get into any moving vehicle), had some sort of hand in getting me that car because he probably thought it was dangerous enough to have a 12-to-7 year-old girl out driving, she should at least have a safe car (that is sparkly red and goes really fast).

Anyway, it all adds up to me just feeling really crazy;  as if “reality” and “me” do not seem to ever intertwine anymore. And, actually, maybe we never did.

It gets a little depressing.  I’m making sort of a joke about it here on the blog, but I am starting to find it a little alarming in my non-blog life. That said, though, life does indeed go on.

I’m planning to spend the entire day at my desk working on the new erotic short story, “Novitiate.” Try to move that forward because, so far, I’m not making the progress on it that I would like to make.  I still find that I’m battling myself a little bit in how to put this story onto the page. Not so much censoring myself, as trying to determine if where the story keeps wanting to go makes any real sense.  And rather than trusting in the process of the story’s innate knowing of itself, I have decided to become some sort of roadblock to that unfolding.

And I really wish I would stop doing that. I am hoping today will be the Big Day where I can get out of the story’s way.

(I guess that being a roadblock to anything can also be a source of depression.)

So I’m hoping that today will be a day for moving on. If we were to judge it solely by how I’m feeling right now, well — it’s not looking too promising but the day is young!

Okay. Yesterday, Nick Cave sent out a Red Hand File that was really moving. You can read it here. And the Nick Cave Instagram site released an announcement that a collaborative album he made with the Belgian composer, Nicholas Lens — titled L.I.T.A.N.I.E.S — will be released in early December, and one piece from it has already dropped: “Litany of the Forsaken.”

(And do yourself an enormous favor, if you go searching for the album on Amazon, remove all those periods between each letter, otherwise you will make yourself fucking insane and never find it.)

Okay!!! On that happy note…

I’m outta here. I hope you have a better Saturday underway, wherever you are in the world. Thanks for visiting, gang!! Today, I leave you with my anthem — okay, maybe not my actual anthem. I don’t think I really have one. But it will probably be played at my funeral, or at the very least, my wake. I’m sort of a “medium” U2 fan. I have several of their albums. But I’m not, like, a huge fan.  But I do love this song — it’s probably my favorite of theirs: “I Still Haven’t Found What I’m Looking For” (1987, off The Joshua Tree). So I leave you with that. Enjoy. Lyrics are in the video. I love you guys. See ya.