Wow, I really slept in today, gang. It felt great but I kinda feel like half my day’s gone already.

I need to go into town and get groceries today because there is practically nothing left. Milk, V8 Juice, Almonds, and Cocoanut Water. That’s all there is in the house. And that’s about a 2-hour chunk of time, total, right there — driving into town & back to get groceries.

(My spellcheck is alerting me that my spelling of “cocoanut” hasn’t been in popular use for the last century. Yet this is how I was taught to spell it and I am not a century-years old yet…hmm.)

Anyway. I overslept. But only because, yet again, my bed and my room were so incredibly comfortable. I just slept so great. And the very moment I awoke, I checked my email because I’m still awaiting those comments from the director re: my revisions on the play. They have not yet arrived! But I did notice that the very moment I opened my eyes and checked my email, a Red Hand Files letter-thingy from Nick Cave arrived at that very moment. So I’m guessing this was why I bothered to wake up at all! Because, I tell you; man, I was really sleeping soundly there.

I am just so eager to get the director’s notes to see how close we are to signing off on the play and beginning the Christmas campaign for producers/backers. Even if the director wants me to do some additional work, I know he’s not going to ask me to undo anything that’s already there. I’m thinking that he’ll want something more done to the ending, though. We’ll see. But one thing I know without doubt is that his instincts for what’s needed are always just so on target. So his feedback is just really important to me.

(And someone else who is just so on target re: what a script needs is Peitor and I am really looking forward to being back on track with him with our script, for real, this Friday. I just love that project so much. And even though the finished film will only be about 8 minutes long, every single moment of screen time is considered, shot by shot, because there is almost no dialogue in the film. Honestly, maybe 6 or 7 sentences of dialogue, total. But the film is so absurd that every single viewable thing that an audience can process has to be accounted for. Even if they’re red herrings and sending the audience, subliminally, in an erroneous direction — every shot has to be seriously thought out. So that’s why this script is taking so long. (Plus, the film is funny — so we do spend a lot of time laughing our asses off.)

I want to give an early plug to a fellow blogger‘s book: 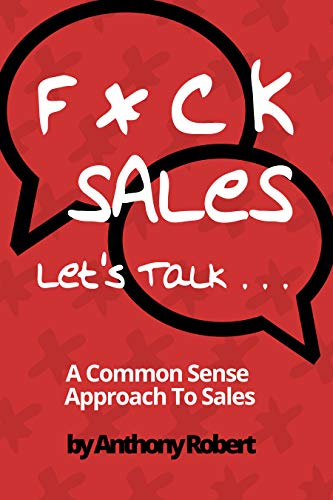 I’m currently reading this in my “spare time.” The blog is called Tony’s Bologna, and Anthony Robert is the blogger.  So far, I am really enjoying the book because it is easy to grasp and very humorous.

The book is indeed about sales strategies and how to better approach selling; and while I am not only “an artist,” but also one who is very, very nearly close to being out of my mind most of the time — one thing I have always been really good at is that I give “good meetings.” I seriously do.I have my shark elements, for sure.

That comes from having grown up in an era where women were simply not taken seriously, ever. And if you were Attractive. Young. Loved sex. Then forget about it — no one was ever, ever, ever going to do anything more than be patronizing towards you. (Oh, and stare primarily at your tits and ask you if you wanted to have sex. Because men owned the world back then — and if we’re brutally honest about it, they still kinda do.)

Well, what I really wanted was to be taken seriously and have sex, but you really can’t do both. And since my career has always been the most important thing to me, 100% for always and forever, whether I was in the music business or in the publishing industry — well, hard as it is to imagine, my sexual availability actually has to completely disappear during meetings. (I know! Sometimes for as much as 60 minutes — or longer, if lunch is involved — I have to seem sexually unavailable! It’s exhausting.)

But seriously. Especially nowadays, artists do have to sell themselves, always. Just always. So even though you might not be in a corporate selling environment, or you might rather die than work in, like, a store; it still helps to understand how to sell something — meaning, your own work; your art. Because there is a lot of psychological stuff going on that’s super good to know about in a meeting (and “meetings” crop up in a lot of different ways if you’re an artist and you need to sell yourself). And this particular book, Fuck Sales, Let’s Talk…, is a really fun approach to all that stuff, if you’re interested.

Okay, well. Nick Cave’s Red Hand Files thingy today was very interesting. And amusing, but also, to me, very interesting. Because, of course, I ponder. Overall, it’s about Nick Cave’s version of the song “Stagger Lee.” A song that, especially if you’re an American (because we are Puritanical to our very cores, when you get right down to it), well, it makes your jaw drop the first time you hear it  — and it’s been around forever now, yet a huge portion, just a really huge portion of Americans are unfamiliar with Nick Cave’s version of “Stagger Lee.”

Not too long ago, for some reason that I can no longer remember, I was showing a young woman the original “Stagger Lee” video on YouTube. She lives in Kentucky. Sort of educated in certain specific areas, but all tatted up and pierced everywhere and a smoker, 420 friendly and all that, and for some reason, it just never occurred to me that  she wouldn’t connect with how amazing the song was.

Well, she didn’t. Oddly enough, the first thing that amazed her was that he was smoking a cigarette on the stage (in the video). Even though she smokes, she was taken aback by it: “Whoa, he’s smoking on stage.” (Which to me, shows just how culturally brain-washed younger people are nowadays about making choices — even their own choices, because she smokes.) Anyway. Once she said that, I thought: oh boy, smoking is so much the very least of it… And then he sings all the other stuff and she was just shocked by it. She said, “Wow, that’s harsh.”

And I said, “Don’t you think that’s amazing, though — where he took that song? How extreme it is?” But she couldn’t go there; I had seriously misjudged her mind’s ability to go out on a limb.

You know, as an aside — in the old days, the only people who were pierced and had copious amounts of tattoos, were the fetishists. The marginal people, well outside of mainstream thinking. Now it’s more a signal of mass-tribalism and fashion. It’s not necessarily an indicator anymore of where a person’s mind is capable of going.

Anyway. I still think that what Nick Cave did with that song, even though I am the last person to celebrate murder in any way; I still think it was courageous and brilliant and true to the character he was creating at that specific moment; just so over-the-top in a gloriously horrific way. And the video still blows my mind — the pink tee shirt and the white pants, and all those cool men and the absolute noisy chaos of the ending — which I had always assumed was some orgy of sex and murder. But perhaps it’s just sex. Or just murder.

Nick Cave made a comment in his response today about how he sometimes wonders if anyone really listens seriously to his lyrics (I’m paraphrasing) and my initial reaction was, “What sort of weird Nick Cave planet are you on, dude?? Everyone listens to every single word of your lyrics!”

But then I was reminded of my recent brunch with Wayne and Sandra in NYC, wherein Sandra, an absolute woman of the world, had never heard of Nick Cave at all; but Wayne had and has at least known of him for a very long time because Wayne was married to me for 14 years, but he only owns the CD Murder Ballads; a thing he acquired only recently because a niece gave it to him as a gift.

So I made a remark about “Stagger Lee” because I know Wayne’s sensibilities and I know that would be the type of song Wayne would love. But he didn’t know the song. I said,”You’re sure the CD is Murder Ballads?”

ME: ” And you don’t remember hearing that song?”

HIM: “I guess I have to listen to it again. Pay more attention to the lyrics…”

So, I guess Nick Cave is actually right. Who knew?