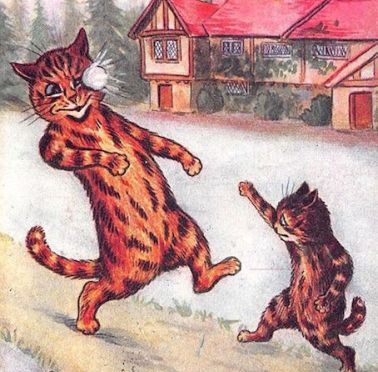 (Wow. Well, I decided to take a photo of the snow outside the upstairs window at the end of the hall and guess what??!! Another ladybug!! That’s the little dark spot on the window there.  My house is just a ladybug factory this winter!! So auspicious, right?)

Well. Man. Did I oversleep this morning. I didn’t get out of bed until nearly 8am!! I hate that. I feel like the morning’s half gone. So I didn’t meditate after breakfast; just did the Inner Being journal thing and then went straight into laundry mode.

I feel like I’m drunk, or something. You know that feeling? You sort of lurch yourself from sleep and you can’t get your brain to really focus? You’re sort of reeling around? Perhaps looking normal on the outside, but teeter-taughtering on the inside. (Too funny! Spell check advises me that I might really want the term “teeter-slaughtering” here. Wow, really?? I’m not sure I even want to know what that term might mean. I’m guessing the word I really want here, though, is teeter-tottering. Anyway.)

OMG! I just had the most amazing detour here, gang. I got the very best inspiration for a micro-short video series just now, that’s based on a musical comedy stage show that Peitor and I are also working on, so I had to text him!!! (Hopefully, I didn’t wake him. It’s only 6:30am where he’s at, and he’s a really light sleeper.)

Well, here’s hoping, gang. But I couldn’t risk forgetting to tell him the idea I just came up with. (I realize that there’s this thing called “jotting it down on a piece of paper…” But the lure of texting is sometimes just too great, isn’t it?)

Sometimes it gets a little overwhelming — the amount of projects that are piling up. Well, it’s actually always overwhelming, but I usually try to just focus on one thing at a time. But I’m getting into one of those phases where a number of my own projects are starting to vie for my attention all at once again, and then I feel like there’s just not enough time in the day. And so, then, when I oversleep, and the brain refuses to kick into gear — wow, it makes me feel so impatient. So frustrated.

(Oh, wow. I just came up with another great idea, based on something else Peitor and I are already working on – it would sort of jump-start the whole project. This is sort of incredible. I think the Muse is banging speed today or something.) (Of course, I would have a Muse that abuses recreational drugs…)

I am just in the weirdest frame of mind here this morning. I don’t know what’s up with me.

Well, on another topic.

I went to a baby shower over the weekend. I was not the oldest woman there but I was in the upper echelon, for sure. (And I also know for sure, that in that elite few, I was by far the least mature…)

Well, I brought this gift that I guess is sort of old-fashioned now, because no one at the shower had ever seen anything like it before. I was stunned. (A set of little pewter boxes for saving the baby’s first tooth and the first curl. This particular set was in the shape of a little horse-drawn carriage.)

Most of the women there were young mothers, and they were sort of gushing over this gift because they wished they’d had it for their own kids. They’d never seen anything like it. And it just made me feel a little like I was from some distant outer-space old-person land.

And, also, there was a young woman there with really long, full, thick hair, and she’s in the process of stripping out her hair color so that she can have it dyed “silver.” And she said to me, “Like your hair, actually! I want it to look just like yours.”

And of course, I was quietly thinking: Jesus Christ, why would you want to rush that along? What I wouldn’t give to have my long brown (non-thinning) hair back. I know it’s a trendy color now — a sort of luminescent silver. She’s actually not the first young woman who has said that to me about wanting my hair color. But it’s just funny. This woman couldn’t have been more than 25, already a mother of two toddlers, and wanting silver hair. Already.

Well.  I guess I’d better scoot. Try to get started here. Thanks for visiting on this snowy Tuesday morning, gang!! You probably won’t believe what I’m leaving you with today!! But don’t just dismiss it out of hand! Listen to it!! Because it is awesome. Roy Rogers — yodeling his way through some Texas Swing!! Here, with the Kentucky Headhunters from , like, 1990, or something,”That’s How the West Was Swung.” If you are feeling at all gloomy or sluggish, this will knock it right out of you. I’m so serious. All righty. I love you guys. Maybe I’ll check in again later.  Meanwhile — see ya!!