Yes, I’m just hanging out here in Crazeysburg with my   rooster today!! What could be better –right, gang??!! It’s going to be another really gorgeous day.

Okay, well. Yesterday, as gorgeous as it also was, was an adventure in gardening, so I never got back here to post again. I was too exhausted.

I went to town early, in order to get my groceries and then to get the flowers for the summer —  but apparently this pandemic has made it next to impossible to get impatiens, which is my preferred flower for the boxes & planters on the porches, because they bloom like crazy, all summer long, and they require no maintenance except for watering.

Well, there were no impatiens at all — none, zippo, zero. So I had to load up on my second preference, which they did have– petunias. They require a little bit more maintenance, but not much, and at least they bloom all summer long, too.

But by the time I got everything home, even though it was only 10am, it was already in the mid-80s Fahrenheit. Just super sunny and super hot.  And I had bought 42 plants that needed to be replanted into 9 flower boxes and planters. But because of the intense heat, I was exhausted by 10:03am…

However, I carried on. Plus!! I have a toad this year!! I discovered him last week, when I was raking that enormous pile of leaves outside my back door.  He came hopping out of the leaves, startled me, and then delighted me, and then went over and sat closer to the house and watched me rake for quite a while.

Well, yesterday, it looked like the very same toad, but I honestly have no clue if it was or wasn’t. However, there he suddenly was, on the kitchen porch, right in the middle of all my gardening stuff, hopping around in the shade of all the many new flowers that were waiting to be re-planted.

He stayed on the porch with me for really quite a while. I chattered at him and asked him all kinds of questions while I worked, but he was cagey and answered none of them. 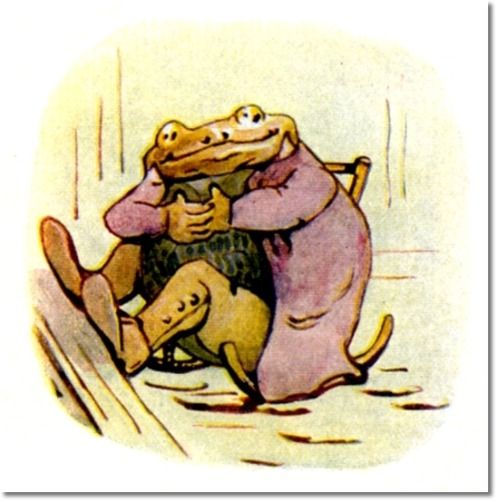 Eventually, he hopped off the other end of the porch and went his happy way, but it was really nice having him to talk to. (Or at least to look at. Although for much of the time, he was motionless and just staring at me while I talked to him — so, it actually made it seem like he was listening to me!! Which was so nice!!) (My cats pretend like they’re listening to me when I chatter at them all day long, but they know that if they just look at me patiently for at least a moment, I will eventually leave them alone and go away!!)

It seemed like it took forever for me to get the flowers planted. People were texting me and the phone was ringing and I had to keep getting things to drink because it was inching up toward the 90s and I was sweating like crazy. And then I was hungry. And then I was exhausted again. And on and on. And then, by around 1pm, I ran out of potting soil and I only had one planter left to do!! But I had to drop everything, get back into my car and drive back into town!!

Yes, another 25 mile trip (each way)!! Except that on this trip, I was all sweaty and dusted with potting soil from head to toe.

Luckily, halfway to town, I remembered that there is a really big gardening center along Highway 16. I don’t ever shop there because they’re privately owned and very expensive. But all I needed was one bag of organic potting soil, so I stopped there and went inside and got my potting soil and wished that I could afford to shop there more often because they have such great garden stuff!!

And you can tell they’re privately owned because they have uplifting Scripture from the Bible printed on large banners and hung on the wall by the check-out. Which means they’re Christian and hold Christian values and they want you to know that your patronage is practically sacred to them. Publicly-owned stores nowadays would never risk publicly displaying Christian values. Atheists will write many, many angry letters to try to shame you for it. (If you’re privately owned, you can just advise the Atheists to shop elsewhere and keep on keeping on…)

So, by the time I got the final planter finished, and swept off the porch and had everything watered and all cleaned up, and then took a shower and got all the potting soil washed off of myself — it was 5 hours, total. And it was really hot, outside and inside, and I was just unbelievably exhausted.

But the flowers got done! And I was happy. Summer can now begin!!

And then, because of something someone had posted on Instagram yesterday afternoon, I felt like watching that movie, Billy Elliot– the original one; not the new musical version, which I haven’t seen yet.

So, after dinner, I streamed Billy Elliot at the kitchen table and all the flowers were on the porch there, and the kitchen door was open as were all the windows, and the world was beautiful and I  had the most wonderful evening. And I could not believe that Billy Elliot came out in 2001 and is 19 years old already. I could remember, plain as day, sitting in a movie theater in NYC — I was still married. With no thoughts whatsoever of ever leaving New York.

It is just scary, gang — where does the time go??!! Honestly!

And this morning, Nick Cave sent out another Red Hand Files letter where he talks about the personality, or mindset, of creative people (that’s sort of putting it in a nutshell).  I totally related to what he said. You can read it and decide for yourself at the link there.

And on that happy note!! I’m gonna close this and reply to the 5 texts I have gotten in the past 20 minutes… And then get down to work here!!

Have a great Wednesday, wherever you are in the world, gang!! Thanks for visiting. I had forgotten that T.Rex’s original version of “Cosmic Dancer” starts off the Billy Elliot movie (in such a glorious way, too). So, even though I streamed the re-mastered version of T. Rex’s Electric Warrior as I drifted off to sleep last night, I’m gonna close this with Nick Cave’s version of “Cosmic Dancer” again, which I just love — and which is available now for purchase, gang, wherever you buy your music!! All righty. Enjoy. I love you guys. See ya.