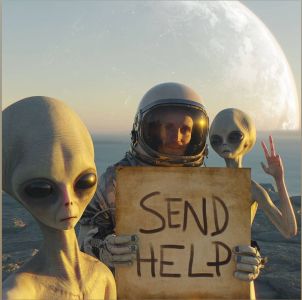 But as far as the news is concerned, I don’t have a whole lot today. And even though the videos that are bombarding Bitchute this morning are truly just awful, I still get the overall feeling that the real news is kind of “good.” Or at least promising.

One of the topics that has been trending for several days, but which I won’t post here, has to do with the photos of the hybrid animal-human experiments. I honestly believe these poor creatures are an abomination in the eyes of God and to all sentient beings. However, if you aren’t aware that they’re out there, you might want to do some research on your own. Be forewarned that once you see the photos, you cannot un-see them.

(We have been told that about a year ago (?), when the D U M Bs were first being emptied out and these poor creatures were discovered in underground labs, they were mercifully put to sleep by soldiers and buried in unmarked graves on an island outside Manhattan.)

Both Ch*rlie W*rd and David M a h on ey had some great news from Spain this morning!

Another trend I noticed in the news is Poland! It seems like a good country to be in right now. (And as far as I know, gang, when this war is over, the Marxist and debilitating E U will be going bye-bye.)

“JUST IN – Parts of EU law are not compatible with Poland’s constitution, the country’s top court rules, setting up a potential fight with the European Union.”

“The move risks FURTHER throwing Warsaw’s plans of receiving €57bn in post pandemic aid from EU into jeopardy over Brussels’ concerns that the rule of law is being degraded in Poland.

“Daniel Freund, an MEP on the budgetary committee, said the decision was “saying goodbye to the European legal order”, adding that the EC’s recovery plan for Poland was “an absolute taboo”.

And from Breaking Defense:

The new system, which could cost between $12 and $17 billion, will be almost entirely homegrown – a major impact on Polish industry.

I thought this looked promising for Adelaide. Cargo arriving? Contact from the outside world?? From Whiplash347:

“Giant Antonov cargo plane lands in Adelaide
One of the world’s largest aircrafts – an Antonov airplane – has landed at Adelaide Airport to briefly unload cargo, before taking off again tomorrow morning.”

Also promising, this time for Germany:

And this was quite interesting!

Okay, gang. If you aren’t following M c a fee on tel e gram, you should! He posts short, cryptic, informative videos that I am not able to embed here. Plus it’s just kind of fun — trying to figure it all out.

Here are some images that I thought might be helpful, especially if you’re new to all this:

I liked this just because it made me feel hopeful!

And this was on Tarot by Janine’s Instagram page. (If you don’t understand this, research Rockefeller, Cancer, 1913, and how they made natural healing illegal to force you to buy dangerous pharmaceuticals!)

And that’s really kind of it, gang.

Nick Cave & Warren Ellis played to another packed house at the Royal Albert Hall last night in London. They will finish the UK tour for Carnage on Sunday night, October 10th, at the Dome in Brighton, but it is sold out. (A few dates coming up next week in Paris, Antwerp, Amsterdam — but they are also sold out.)

All righty! Have a great Friday, wherever you are in the world. Stay alert. We’re in the 10 days of intermittent darkness! Stock up, if you can!

Okay. Thanks for visiting, gang. I love you guys. See ya!

Voice of Reason UK checks in over censored comedians (3 mins):