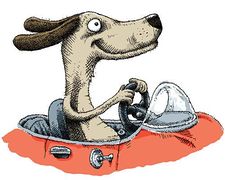 I’m heading out early today, gang. Have to drive to one far away town (30 miles) to spend some quality, post-lockdown time with those guys at the Honda dealership! My very grown-up car informed me last Monday (the last time I was actually in my car) that it was time for an oil change.

Then I’m going to drive to the other far away town and get the groceries.

It’s a stunning day here today, gang, so it’ll be nice to do all that excessive speeding on the highway with the music blasting! (And just a quick note to those of you who are new to the blog — there are usually only about 3 cars on the highway out here in the Hinterlands (no exaggeration!), and in the Honda, it’s almost impossible not to speed.) (Plus, you can drive these Hondas for 10K miles now before you need an oil change. I find this astounding.)

Well, I did finish that new chapter for In the Shadow of Narcissa yesterday, but I still want to tweak it. So that’s what I’ll likely do when I get back from town.

On that note, though, I gotta scoot! Thanks for visiting, gang. I leave you with a song that I’ve posted here many times, but I just love it. And something I saw at about 4am this morning on Instagram that took my breath away, has had me singing this song all morning!! “Breathless” by Nick Cave & the Bad Seeds, from their double-album with two impossible-to-spell titles from 2004, Abattoir Blues / The Lyre of Orpheus.

All righty!! Have a wonder-filled Monday, wherever you are in the world, gang! I love you guys. See ya! 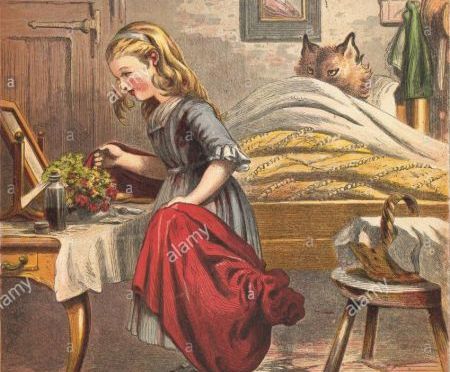 I saw this illustration and it just felt like me as a reasonably happy little girl, and then, behind me in the bed, was everything else imaginable in the world that was waiting for me.

When I actually was a young girl, I never really related to the Little Red Riding Hood story. All the virginal symbolism of it and the whole “girl meets wolf” thing. It held no appeal to me.

The only fairy tales that I actually related to were Beauty and the Beast (the old, non-Disney version) because Love & Kindness trump everything else in the world always; and Rumpelstiltskin because the helpless girl was forced into that horrible situation, then became queen, and then, as queen, tricked that mean little guy and got to keep her baby. I liked that story a lot.

And I also loved the story Peter Pan. And I mean, I really loved that story — I loved Peter and totally related to him. (Perhaps that says a lot about the way I still live, I’m not sure. I sure as hell didn’t grow up — didn’t do the “Wendy” thing. So who knows.)

Well, anyway. I loved that photo of the moon last night, up over my barn (see post below). I just find this village so mysterious and magical. I really do. Loyal readers of this lofty blog perhaps recall that after my 4th weird near-death experience, which came just prior to meeting that older man who died (that I wrote about a couple days ago), my life seemed to change so dramatically that I began to wonder if I had actually died in the near-death experience and just hadn’t figured that out yet.

The man was still alive when I moved here, but not for long afterward. And I wondered if maybe he had only been sent into my life to help me cross over in some way. I often felt, when I first moved here, that the transition to this actual house, to this intensely spirit-filled town, was me moving into some sort of “between world” — no longer alive but not accepting death yet, but not knowing it. And readers perhaps recall that right after I moved here, the Latter Day Saints came into my world in the most amazingly joyful way. It only added to the intensity of me not feeling like I was alive anymore. (It is so hard to explain this if you don’t live in Muskingum County because it involves all these ancient burial mounds around here that are 2000 years old; they are considered sacred ground to the Mormons.)

To be honest, I still often feel that way — that I am not really alive anymore but haven’t figured out yet that I’m dead.  Mostly because there is no way to prove that it’s not true.  You know, there is no concrete way to prove I’m still alive and not actually dead, because everything could just be a sort of fake reality that I only think I’m perceiving.

When I saw that moon last night, and how amazing it looked over my barn, and how amazing this town feels at night — wondering why on Earth a woman like me, a woman who was always so intensely urban, who always wore a little black dress & black high heels everywhere she went, why she even has a barn; well, once again, it made me feel like I’m not really alive anymore. That I’m in some strange in-between place and I only think I’m still alive. Because I was just never, ever like this before.

Wherever this is, it’s really beautiful and I really love it here. But, wow, gang; I am really getting tired. I know it’s because I am doing so much writing; just nonstop — bringing everything from inside to the outside, nonstop for the last 12 months. Including the TV pilot (Cleveland’s Burning) that I went to LA about, which is still sitting in need of certain key people and very soon, I have to pitch that whole project to the Head of Programming of a huge streaming platform and I don’t have those key people in place that they asked for because I immediately wrote a novel, launched into that micro-video production company with Peitor, finished writing a play with Sandra, then wrote 2 entirely different versions of another play, became overwhelmed by the Girl in the Night  stories, and on and on…

Everything coming out of me and nothing has landed anywhere yet. And now the trip back to NYC is looming next week. It’s exhausting. So  much “outgoing” and absolutely no incoming. Well, certain indications of it, but nothing concrete yet. Just constant “outgo.”

Yesterday afternoon, the horrifically loud carbon monoxide alarm went off in my basement. Not a thing any homeowner wants to hear. I was working on Tell My Bones up in my room and suddenly it started shrieking. I went down to the scary 118-year-old basement, and down there, the alarm was just deafening. I couldn’t get the alarm to shut off, and for a few minutes, I stood there and stared at it, knowing I should call the fire department. But wondering if this might not just be the best thing in the long run.

I eventually did go get my phone and was about to dial 911 when the alarm shut off. And none of the other alarms in the house ever came on, and God knows, the house is well ventilated with 21 wide open windows. But, Jesus, I am just so tired.

St. Christopher actually was a saint, don’t let them persuade you otherwise. He did exist; he’s not some myth, although his actual name was slightly different. And if you talk to St. Christopher, he listens. You can actually feel him listening to you.  You know, I am still doing that segment-intending stuff, trying to survive my life in 5-hour chunks right now, but still not knowing how I am going to survive that trip back to NYC. All the driving and then dealing with everything I have to deal with there. But then I heard St. Christopher in my head, saying that he was going to take care of the whole trip, and not to worry. That I was going to have a great time.

I believe him. He is the patron saint of travelers, after all. Especially of 12-year-old girls who are suddenly driving grown-up cars…

Well, anyway. That’s where I am today. Not really the best head space, but I’m trying. I must get back to the play. It is almost done.  So I will close this. I’ll leave you with the 3 songs I was listening to on my phone this morning, around 4am, when I was wondering if I’d ever finish this play and/or even bother to get out of bed again. Thanks for visiting! I love you guys. See ya.