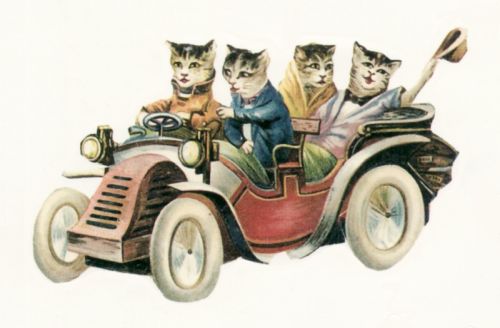 Yes, that is currently me, in the happy intersection of life.

Then, of course, Peitor and I got back on our writing schedule for Abstract Absurdity Productions.

And then I heard from Sandra last night that our other theatrical project, The Guide to Being Fabulous, is once again moving to the forefront in Toronto. (Translation: TONS of rewrites needed there, plus a trip to Toronto for an initial roundtable with the director and the producers at the theater.)

It’s like standing in an intersection and having 6 projects coming right at you, all of which make you really happy, and all of which require 100% focus, attention, concentration. But if you don’t make a decision immediately about which one to focus on, they are all going to run you over.

I think this is why I’ve been staying in bed a little later every morning, even though I’m still awake every day at 5:30 am.  Still going down to feed the cats, eat breakfast, listen to music at the kitchen table — in short, enjoying my peaceful little early morning solitude time. I then go back upstairs to meditate and then center myself by writing in my Inner Being journal thingie. And THEN — I go right back to bed and stare out the window.

I only drive into town once a week to buy groceries. It’s 25 miles each way, so that’s an hour of driving. I drink organic milk, too, so that’s why I buy my milk in town. There is of course milk readily available at the gas station. Two minutes from here.  And even though it’s actual milk, you know; it works. It makes my coffee not-black. But still. Come on. I’m surrounded by farms here for miles and miles and miles. I want my organic milk. But the gas station is not going to carry that and yet only the gas station is open at that lowly hour of the morning… (Which reminds me, yesterday, I was out on the main road that heads out of town, where all the farms begin, and I actually saw a bull trying really hard to mount a cow who kept  sort of scurrying away from him — if cows can be referred to as “scurrying.” It was funny.)

But I digress. My point is that I did indeed run out of milk, which never happens, which tells me that I’ve been hanging out in bed too long, drinking way too much coffee…

But how do you prioritize projects when every single project you’re working on is something that makes you really inspired? Or feel fulfilled, or what have you. My brain gets sort of jumbled. And when that happens, stress sets in.

(I think I will blame my Muse, for being too intensely and wonderfully muse-like. But I’m not gonna shut off that valve, no matter what.)

So, here I sit. At my desk. Dressed. Black coffee in my enormous autumnal coffee mug. I have no clue what I’m going to work on first today. And the morning is already half-gone. (And I need to get my ass to the gas station and buy some fucking milk. Because black coffee sucks!!)

But I’m happy! So that’s cool.

And while I try to figure out what the heck I’m doing today, I leave you with my breakfast-listening music from this morning! I just love this song: “Crow Jane” from Nick Cave & the Bad Seeds’ Murder Ballads, from something like a million years ago (or 1996 — something like that).

Thanks for visiting, gang. I hope Monday is just a really great day for you, wherever you are in the world!! I love you guys. See ya!!