Okay. So, yesterday morning, after spending an hour and a half chiseling my beloved Honda Civic out from under 3 inches of solid ice in 2 degrees-Fahrenheit weather, I got an alert on my phone that a woman and her children had frozen to death in Houston, T  X, where it’s not ever supposed to get that cold. And I absolutely cried.

I, personally, love snow, but weather war^ fare is a whole different story, gang. I am just so over this shit. I know we are getting closer to the end of all this stuff, but yesterday morning was rough for me.

After the “ice all over the car” debacle  — due to something that was absolutely not my fault, my wee bonny bank account alerted me that it was overdrawn! And that if I didn’t come up with $3.45, pronto,  my car insurance payment was going to bounce.

So I consulted my Olaf coin-bank on the top of the refrigerator, only to learn that he only had $1.14 to contribute. And then the dashboard in the car yielded only a meager 75¢ in quarters — still not enough to pay the balance left on my fucking car insurance for something that wasn’t my fucking fault.

You know? Fuck. Honestly?? Really?? It’s 2 degrees outside and I have 1 dollar and 89 cents to my name?? And — really, really soon — no car insurance?? WTF, right? I am 60-fucking years old.  I have had the most unexpected writing career for the last 31 years. And this time last year, everything was going really, really great…

I try really hard not to personalize what is going on in the world right now and I try really hard to stay positive and look to the future, when all this will be behind all of us and a new dawn will be upon us

I, for one, am so seriously over this stupid fake year-long p an d e m ic and all its atrocities and all its secret war ^ fare already.

By the time I got to the health food store, I was really having trouble keeping it together. And a woman I barely know, asked me if something was wrong, and I blurted out, ” A woman and her children froze to death in Houston yesterday! And if I don’t come up with one dollar and fifty-six cents, I won’t be able to pay my car insurance!”

And even though that should have sounded insane to her, what she did instead was open up her wallet, take out $40 and then give it to me, saying, “I knew this money was going to come in handy today! I found it in my purse last night and I didn’t even know I had it. I want you to have it.  Please. You don’t have to pay me back.” Oh my god, right?

It’s those tiny miracles that just turn everything around in a heartbeat.

And then by evening, things really were so much better.

Well, listening to P * triot str ee t fighter during my dinner, caused me to look up a video from a few days ago — a chat between Mike  J   a k o and Gene D * code — that just really turned everything around for me.

Anytime I listen to a Gene D * code chat, I feel like my consciousness has grown in quantum leaps.  This time, the idea that the Med Beds (which I posted about yesterday) will be used to help reverse the devastating effects of the fake v a  c  c  i ne (which was supposed to be a world-wide geno cide) really began to help things make sense for me right now.

However, I still have trouble wrapping my mind around this idea that a secret s pa c e ^ f or ce has managed to build communities of humans on Mars and the Moon; that humans have actually already been born on Mars… You know, what is that? And now, all these D **p St * te people from all over the world, the ones who haven’t been hanged but who are guilty of atrocities that we couldn’t even imagine before — these monsters are now in some sort of prison on the Moon for the rest of their lives because the m * li tary didn’t want a bloodbath  down here in the streets (once the general population awakens to what these monsters are guilty of).

Okay. SO. That is just really hard for me to wrap my mind around.  They’ve all been transported to some sort of prison on the Moon?

Well. Everything is turning out to be a lie in every other area of life right now, why not on the Moon and Mars, too? Who’s to say at this point that everything isn’t in fact teeming with life up there?

You know, I’ve had to wrap my mind around our beloved monster h  i l l ar y, torturing and eating children. Getting past that makes it easier to accept that I’ve been told outright lies about Mars and the Moon, as well.

The good news, of course, is that people have been a r  r e s ted the world over, some of them have been ex  e c  u ted, and the rest, I guess, are on the Moon, far from us. Med Beds will help reverse this ho rr i fic fake v a c  c ine. And now it’s looking as if there will never be another p  o p e again…

Thinking about all this during Lent, as I study the possibilities of a different Jesus of Nazareth altogether (see yesterday’s post) — well, it falls together and makes good sense.

And through the generosity and kindness of a veritable stranger, I now have $38.44 to my name instead of -$1.56.  And car insurance. It’s those kinds of miracles that assist me in believing in everything.

Okay. So. Even the Bad Seeds are in need of some financial support! Nick Cave’s official website announced this morning that there is an upcoming auction to help support their stage crew, who are also suffering financially from this fake p an d em ic, since all tours have been canceled. You can read about it here. There are some very cool things up for auction, folks. 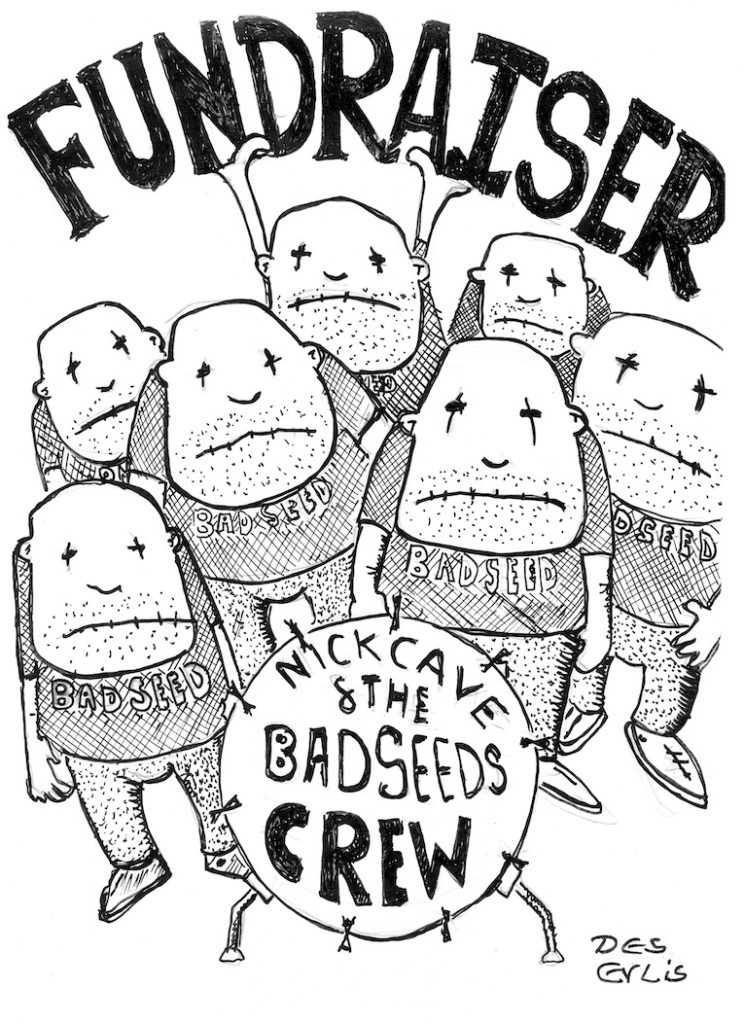 And over at Cave Things, there is a new Polaroid Photo up for sale. It looks like this!! And here in Crazeysburg, where the snow is once again falling, and temperatures have once again plummeted because of that polar vortex-weather war ^^ fare, I have been able to turn my whole world around and feel really excited about the future of this planet, Earth.

I am going to be working on a new short story for the kind folks in Sweden today.  And I’m just gonna let it snow and pray for the world-wide transformation to come soon.  Meanwhile, I leave you with my breakfast-listening music from this morning, “Roy Rogers,” from Elton John’s monster album Goodbye Yellow Brick Road (1973). Enjoy.  (And oddly enough, my biological grandmother was childhood sweethearts with the real Roy Rogers — Leonard Slye — back in the early 1900s. He was an Ohio native. Real small world, isn’t it???) Okay. Thanks for visiting, gang. I love you guys. See ya.

Sometimes you dream, sometimes it seems
There’s nothing there at all
You just seem older than yesterday
And you’re waiting for tomorrow to call
You draw-to the curtains and one thing’s for certain
You’re cozy in your little room
The carpet’s all paid for, God bless the TV
Let’s go shoot a hole in the moon

[Verse 2]
Nine o’clock mornings, five o’clock evenings
I’d liven the pace if I could
Oh, I’d rather have a ham in my sandwich than cheese
But complaining wouldn’t do any good
Lay back in my armchair, close eyes and think clear
I can hear hoof-beats ahead
Roy and Trigger have just hit the hilltop
While the wife and the kids are in bed

Below: Most awesome video you see all month, if you haven’t already seen it. From last Friday.  Mike Ja  ko talks with G* ne De  code. (1 hr 5 mins)