It’s just that kind of morning, gang.  At what point do we stop going down the rabbit holes and just resign ourselves to this new version of Earth; this new version of the past? Knowing that at least it’s finally leading to a much more interesting future, even though everything we thought we knew, up until about 2 seconds ago, was a lie?

It just goes on and on, doesn’t it?

Actually, I’m of the opinion that this new timeline the Earth jumped onto — taking all of us with it — does indeed have a completely different past from the one we had on the old timeline.

If we want a new future, one that doesn’t involve us having been nuked out of existence by our beloved (and thankfully departed) h  i  l  l a r y, and if it comes along with a different past that makes all of us right here, right now, feel like we’re losing our minds… well, then it still seems like a really good trade-off.

Okay. If you haven’t seen it yet, there is a disturbing video that originated on t  i  k  t  ok, that indicates if you turn over a can of P r in g l e s potato chips and enter the code stamped on the bottom of  the can, into an a l i ba ba search engine, it brings up pages and pages and pages of where to purchase a d r e no c h r ome.

I’m not going to waste my money on a can of potato chips only to then do something on the Internet that will make me want to throw up, but please feel free to try it and see what happens.

Even if it’s not true, I’m glad to see a video like that going viral because it is just getting more and more people to realize the atrocity of a d  r e no chr o  me. That it isn’t just some sick weirdness on a South Park  cartoon episode. (And if you saw that episode and didn’t want to gouge your eyes out, you might want to check and see if you have a pulse or not.)

And much speculation about “Ever  given” being loaded with tra  ffi  cked children, which is why it’s being held up in the S uez Canal at the start of Passover… Well, I guess we’re going to eventually find out.

But even if the kids — or even older human beings — are not on that particular run, that shipping line is alleged to be owned by the c l in ton foundation and Wal mart, and has been used for tra  f  f icking humans all over the world.

I am not a Walmart shopper because I have never been able to stomach what it stood for– and now, less than ever.

Word has it that in the U K, where they are relentlessly trying to kill everyone imaginable who lives there, young and old alike, through the very, very fake scam dem ic and the mind-numbingly dangerous v a x es, along with indescribably hard to fathom boatloads of really violent,  illegal im mi grants — allegedly their TVs will be taken over by an e mer gen cy broadcast system on march 30 th, but there is no way to know for sure if this is rumor or if it is true. They will find out, I guess.

But 8,500 doctors, nurses, and medical professionals from the U K and Ireland and the Netherlands are suing  the n h s and the w h o for all the many l o ck downs and falsehoods of the fake scam demic and very real vax.  So, even while they don’t allow us the joy of celebrating these brave people because they do their best to keep them far away from publicity, know that these things are indeed happening all over the world. People are indeed speaking out on behalf of all of us.

So the wind here yesterday was just unreal.  More damage done to the various soffits around my roof. I have a repairman coming tomorrow to give me an estimate.  Just in time for the stimulus check to arrive… but I was just going to pay bills with that money, anyway.

Little by little, it’s all gonna work out. I’m just not gonna let it get to me.

There have been some great podcasts over the last couple days that I wasn’t able to post for you. I’m posting some down below for today, though.

As I mentioned here recently, I’m focusing now on the people who are [17]-related, but who also are focused in an empowering direction. And also not pandering to the fake B* den thing.

It is such a waste of time at this point. If someone is going to present the “news” (for instance, the fake B* den press conference the other day, which we knew was going to present him as a loon because they are on the verge of taking him out) (and I’ve been hearing that the actor portraying the fake B* den this whole time has been James Woods but I don’t know if that’s true or not). Anyway, if you’re going to pretend, even for a moment that these people are real, or are in the W  H, or are making any sorts of “laws” that aren’t solely intended to upset the fuck out of everyone who voted for B* den… Well, then I have really no time for it. I just don’t.

And of course, if you haven’t heard, more mass sh oo t ings are underway all over the U S.  And if podcasters want to report those without mentioning that these are psy-ops, being done on purpose, intended to force A mer i cans to give up their g u n rights, then who has time to listen to news about more and more people dying? More and more lives being destroyed and wasted?

I don’t. I’m just over it. Because there is a lot of amazing stuff coming, for all of us, and that is where I want to focus my energy, gang. Because the more moments out of each day that we can be focused at those higher frequencies, attracting the really joyful stuff — that’s what is going to arrive for us. Not just more and more and more of the same awfulness.

Okay. So. I’m still stuck in this truly weird editor here on the blog. I can’t tell you how annoying it is. It’s like you’re just blogging away into a huge white space. On your end, it still looks normal. But on my end, it’s like the Twilight Zone. Like everything else right now. But the amount of free time I have these days is zero. So for now, I just keep trying to adjust. To everything.

The other day, Nick Cave sent out a great Red Hand File, wherein he discussed the making of the new album Carnage.  Which was very interesting, in and of itself. But he also announced that there will be a documentary film of some sort,  where he and Warren Ellis will perform both Carnage and Ghosteen.  I don’t really understand what this means — if it will be just the two of them, or if there will be some sort of audience. But it sounds like it will be beautiful, whatever they do. So that’s exciting. You can read about it here.

Oh, and don’t forget that Warren Ellis and Marianne Faithfull have another new album coming out April 30th — She Walks In Beauty. You can pre-order it in the US here. 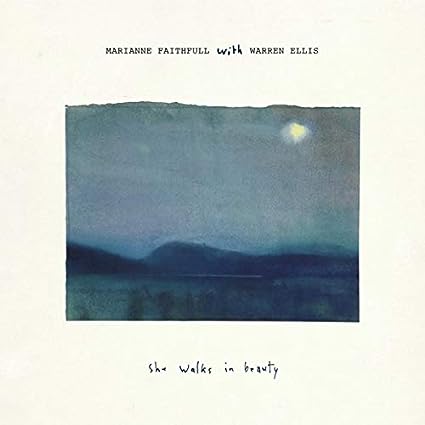 It’s a beautiful Saturday here in Crazeysburg! I hope that you’re having a really nice day, wherever you are in the world.  Keep in mind, as you go about your lives today, that nothing you know is true and nothing you ever thought was true is true anymore. Then let it all just flow away from you like some river that’s going wherever it’s gonna go.

That should keep the decks clear for little bursts of unexpected happiness.  And don’t forget to be choosing foods that decalcify your pineal gland and detox you from those heavy metals, okay? The dreams you’ll start having  at night, and the pictures that will flow into you during the day will blow you away. I mean it, gang.

Let’s enjoy life on a whole new level. (Oh, and PS: I love Pepe the Frog! If you’re on t e l e  g ram, be sure to follow pepe lives matter for the best pepe memes around. He will always send you off to bed for the night with a kek and a smile.)

Okay!! Thanks for visiting!! I love you guys. See ya!!

Below: Nicholas V en iam in and Alan Fountain (38 mins):