Just when you’re hoping that the end is just maybe, just possibly in sight, here comes more and more news to add to the chaos!

I took yesterday off, only because I posted kind of late in the day Sunday, and had caught up on the the news to that point. Well, yesterday was then just a sort of non-stop onslaught of more stuff. None of which made me feel what I would call “happy.”

One thing I did find out today that made me feel hopeful — made me feel that a time could still be coming for all of us, wherein the world will sort of be back to normal: 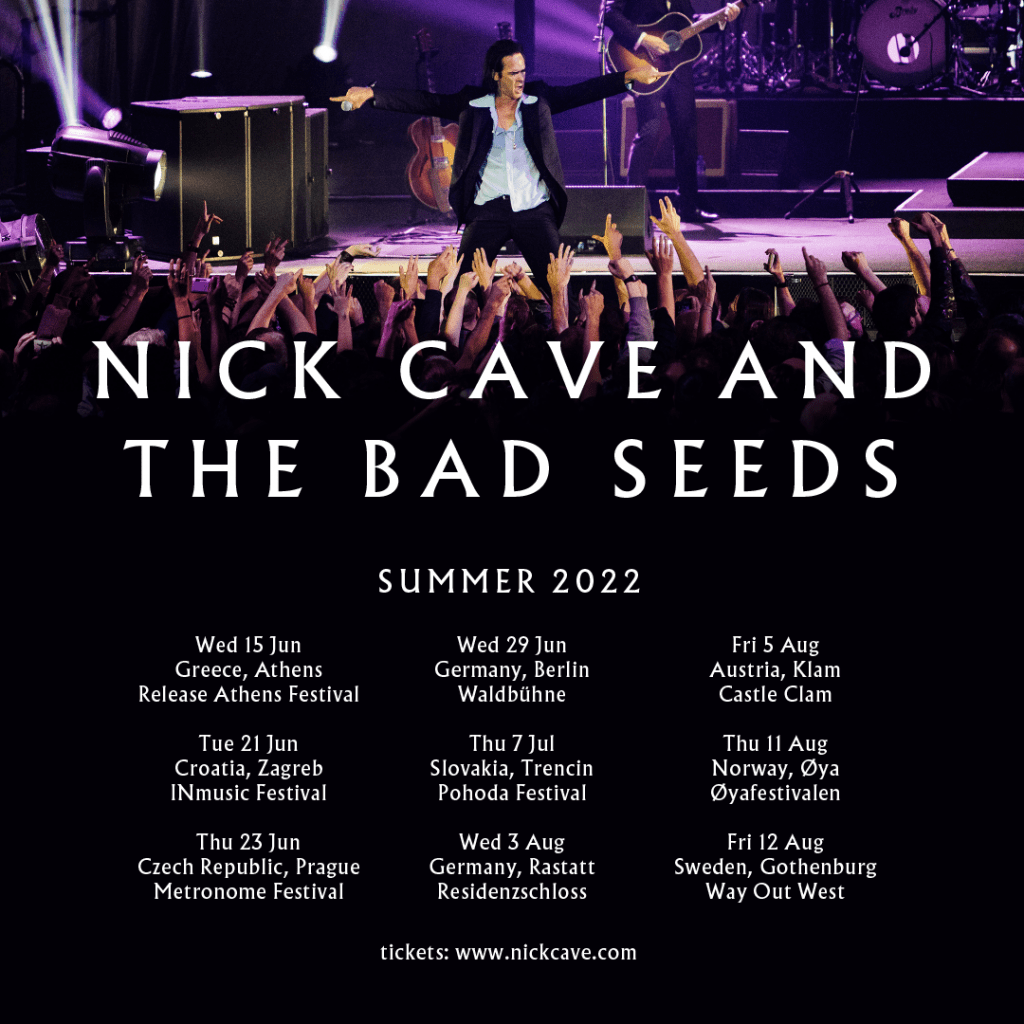 Yes, that is correct! Some of the re-scheduled European shows for the much-cancelled Nick Cave & the Bad Seeds tour were announced early this morning!  For Summer 2022!! You can find ticket information here.

I, personally, cannot imagine ever traveling anywhere again. I am so shell-shocked  from the horrors of this past year — and now, include in that mix these millions of vaxed people out there who could maybe just sort of die horrible deaths all around us at any moment. (The public letter from guitar legend Eric Clapton made me so sad.  For whatever ill-advised reason he took both shots of the fake vax, and suffered “disastrous” side effects, including frightening paralysis — full article is here.)

Anyway, even though I own a whole brand new set of luggage, I get the impression I will never leave Crazeysburg again. And I don’t mean just Europe; I can’t even imagine going back to NYC or to LA, or to anywhere, ever again. It feels like the world outside Crazeysburg is such a horror show, that I can’t imagine trusting anyone, anywhere, ever (not including you, of course, gentle reader!!).

But that’s just me!! Please, feel free to go on with the rest of your lives!!

Okay, so the U S m * lit ar y has indicted the indescribably gracious & graceful l i z c h e ne  y for high crimes and misdemeanors, including tre a s on, involving an attempt to seriously rig the 2 0 20 e l e c tion in  W Y. So that outcome should be interesting to us all.  Next to A  O  C  , that woman has the most obnoxious mouth of anyone formerly at home on the now apparently utterly vacated Capitol Hill.

Next, now that the fake d  r  f a u ci has been utterly outed, it looks like the fake scam dem ic can come to a screeching halt, and that an indictment of premeditated murder could be looming in the fake d r f au  ci’s future (including in those charges of murder, his delightfully thoughtful gift of AIDS that he so selflessly delivered to us all in the 1980s.) (I, however, think he already received an indictment of sorts and is no longer with us, but that is just what I’ve heard from other sources. I was not personally invited to any sort of m * litary tr i bun al, or anything.)

And I’m not even sure that witnessing an e x e c u tion of that man could make me feel anything anymore.  My closest friend and ally, Val in Brooklyn — back in the 1980s, we lost so many friends, family members, colleagues to AIDS back in NYC in a remarkably short period of time.  That was what a true pandemic looked like — where everyone you knew was actually getting horribly ill and then dying.  Real numbers. Real people. Real horror. Every fucking day.

(And oddly enough, I was an anti-masker way back then, too. I volunteered with the Visiting Nurses of NY and since AIDS was brand new and no one understood it yet, we were all supposed to wear masks and gloves around the patients, but I refused to do it. I felt like it was an insult to them, degrading to them. They had already been sent home to die, in hospice care, by the time I would be assigned to them.  To me, it felt insulting to their humanity, to show up with all these contrived barriers against their last days on Earth.)

Anyway, even way back then, I was also a conspiracy theorist! I was certain that somehow the c  i  a or something along those lines,  was behind AIDS. I would read all the underground zines that I could get on the  c  i  a back then to try to figure out what was going on (and those zines actually had plenty to say). In those days, I used to talk to Val about it endlessly — because it didn’t make sense to us. Everyone we knew who was dead or dying from AIDS was a gay male. Why was that? And then, oh —  wait, the blacks in Africa have it now, too!

Really? So, not just millions of gay men all over the world but blacks in Africa have it, too, and basically no one else (yet)?

None of it made any sense. It felt like a targeted genocide.

So, having an answer to that huge awful question mark finally, is the only sense of “comfort” I would have from seeing d  r   f  a  u   c  i  finally go down.

And I’m guessing that if this fake vax horror show isn’t some sort of sick psy-op and can somehow be fixed once the c a  b a  l is truly taken down, then the true pandemic that is coming, from the millions of vaxed folks dying what we have been promised will be horrible deaths — well, I’m not sure I’m up for that. Are you?

So. As the Bishop Larry   G  a  i t er  s has been telling us for a year now — B   L   M practice witchcraft. They are not only dedicated M ar xi st s, but S a t a nists, as well.  (See video down below from We the People News of a different pastor explaining it.)

Also, from We the People News, a very old audio from yet another escapee-survivor child of the S a t a n i c cult. Circa 1970s.  And at one point, he makes mention of returning to “Columbus” and finally discovering what his childhood “witchcraft church” was really about.

Loyal readers of this lofty blog, as well as anyone who knows me at all, knows that I have always detested Columbus.  With every fiber of my being. All of my worst experiences of my life happened there. I do everything I can think of to avoid having to set foot in that city, when/if at all possible.

Well, when I heard the guy say that on the audio recording, it just hit too close to home.

I am still reeling from that interview J * co did with that Cult survivor on Sunday. I had a really hard time overcoming that interview. And she is not the first sex-trafficked, cult survivor I have heard interviewed, but for some reason, her details, her story, upset me profoundly. I can’t really let it go. Mostly, I guess, because she is my age and her childhood was happening when mine was– she should have been experiencing the best years of her life. but what really happened to her and the children around her, was almost too horrific for words. Torture, medical experiments, abuse and rape beyond comprehension.

But she’d grown up in California, so at least there was that mental barrier against the reality of her childhood. However, this morning, hearing that guy say “Columbus” — it was just too close to home. I just cried. I was living (and growing up) in Columbus at that time. Even though his story had a good outcome, it was just too much for me. [See? I knew Columbus was a dreadful place!! — Ed.]

Well, anyway, the video for that is also below.

Plus, more and more weird stuff about the non-terrestrial agenda, and what is really up with  N A  S  A and the lies they tell. (A good friend of mine has been a geologist for N A  S  A  for a really long time, and I know he has studied the moon rocks. I know “we” have been to the moon, but it does indeed seem, from many accounts, especially g en e d e c ode, that the “initial” landing on the moon in 1969 was staged because there was too much already up there on the moon that they didn’t want us to see (yet). But still. How much of everything is a lie now? Who the fuck knows? And it does seem as though the younger generation of adults have been brainwashed into believing a very, very narrow idea of “scientific facts” and rabidly dispelling all others. Very convenient for them but sad for us.)

There  is a lot to feel encouraged about, gang. I don’t want anyone to lose hope — we are on the right path here. Every single one of the Tr ****ps is still smiling — the whole family — and that speaks volumes!! (If I may mix some metaphors there.)

Good things are happening all around us.  The dark players are indeed going down, as videos below will point out.  I just think I’m going through one of those moments where all of it is getting to me again. But I will rally.

Cave Things announced more new stuff coming soon… This time, stuff for kids!! That will be very interesting, I’m sure!

And on that happy note, I’m outta here!! Have a terrific Tuesday, wherever you are in the world, gang. Thanks for visiting! I love you guys. See ya.

Below: Super Soldier survivors who are harassed by parasitic entities can get help. ( 22 mins):

Below: Non-terrestrials and the human hybrid program –if you think that you’re reality gets dicey, well … ! (1 hr):